Why the Cuba Issue No Longer Cuts Against Democrats in Florida 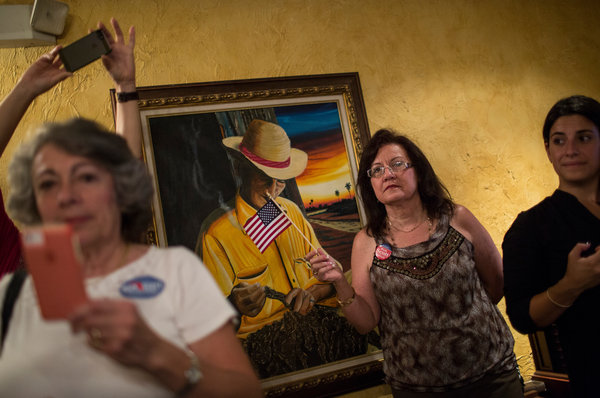 Supporters of the Republican governor Rick Scott of Florida listened to him speak in Miami at a Cuban restaurant in September. Cuban-Americans supported Republican candidates for decades, but that started to change in the last 10 years. Credit Charles Ommanney for The New York Times

The importance of small demographic groups is often overstated by political commentators. The Cuban-American vote is an exception.

Cuban-Americans represent a meaningful number of voters in a battleground state, Florida, that may be critical in the 2016 presidential election. Their political allegiances also seem to have shifted significantly toward Democrats in recent years, which raises the possibility that President Obama’s new policy could accelerate the shift — or undo parts of it.

Cuban-Americans, in short, are the rare small demographic group that could easily decide a presidential election.

For decades, Cuban-Americans were strongly Republican. Their political allegiances were defined by Cold War politics, and the stridently anti-Communist Republican Party was a natural fit for Cuban immigrants who fervently opposed Fidel Castro’s regime in Havana.

The Republican grip on Cuban-American voters lasted all the way through the beginning of the last decade. Cuban-American voters identified themselves as Republican by a margin of 64 percent to 22 percent, according to a Pew Center survey of Latino Americans in 2002. George Bush won 78 percent of the Cuban vote in Florida in the 2004 presidential election, according to exit polls.

Whether Democrats are actually winning the Cuban-American vote is a matter of some debate. The exit poll samples are small and they are subject to error even when they’re large. Heavily Cuban areas of Miami-Dade County, like Hialeah, continue to vote Republican — though Cuban-American voters who choose to live in the most heavily Cuban areas may not be representative of the overall group’s preferences.

Some of the Democratic gains result from generational replacement. The Cubans who arrived at the height of the Cold War represent a dwindling share of the population. Cuban-Americans of the new generation, born in the United States, have no memory of that era, and they’re far more likely to identify as Democrats than older Cubans, according to the Pew data. The exit poll in 2012 showed the same thing: Mr. Obama won Cuban-American voters under age 45 by 26 points and lost those over age 45 by 29 points.

The declining significance of national security and the different waves of immigrants (more than half of Cuban immigrants have arrived since 1990) are plausible but not definitive explanations for this. What is clear is that this shift has dealt a blow to Republican fortunes in Florida. President Obama won the state by 74,000 votes, or 0.9 of a percentage point, in 2012. If Cuban voters had swung a net 20 points away from Mr. Obama — a showing that still would have been far better than John Kerry’s in 2004 — he would have lost the state.

That’s easily illustrated in Miami-Dade County, where Mr. Obama posted what could be called his most impressive performance in the country. Mr. Obama won the county by 24 points in 2012, far better than Mr. Kerry’s six-point victory in 2004.

What was so impressive was that his margin of victory grew by a staggering eight percentage points over his 16-point victory in 2008, even though it was a far closer election nationally. There is no other county, let alone such a large one, in a battleground state where Mr. Obama made similar gains.

Mr. Obama’s strength in Miami-Dade County was decisive. His vote margin there grew by 69,000 votes, or nearly all of the 74,309 votes he won the state by. If his margin in Miami-Dade had narrowed by 3.4 points, as it did nationally, he would have lost the state.

A lot can happen between now and 2016 — as events Wednesday reminded us — but there’s a real case that Florida is poised to re-emerge as the most important battleground state. The problem for Republicans, and the opportunity for Democrats, is simple: Republicans will have a very hard time winning without Florida; they lost it last time; and it’s hard to see where they’re supposed to do much better.

In contrast with his showing in other battleground states, Mr. Obama fared much worse among Florida’s white voters than past Democrats did, and it’s a lot harder to argue that the next Democratic candidate, like Hillary Clinton, can lose much more ground among white voters in Florida.

Florida’s white voters are an eclectic mix of the types who tended not to embrace Mr. Obama, and who might be more inclined to support Ms. Clinton: older, Jewish, Southern, with a significant share of New York natives. If Mr. Obama was indeed near the Democratic floor among white voters in Florida, then Republicans will need to make up ground among Hispanic voters, who will most likely grow again as a share of the electorate in 2016.

Just like the G.O.P., Democrats might end up needing a win in Florida, the single most diverse battleground state — in their case, to overcome possible losses among white voters outside the South.

It’s hard to know whether Mr. Obama’s decision will move the needle among Cuban-American voters. Polling data reflecting Mr. Obama’s decision, which will arrive in a few weeks, will tell us more. Nonetheless, the available polling data suggests that many Cuban-American voters are receptive to restoring diplomatic relations with Cuba, including 68 percent in an F.I.U. poll and 79 percent in an Atlantic Council poll (although the sample was extremely small).

Continue reading the main story 46CommentsPerhaps the more telling evidence, though, is that Mr. Obama managed to make substantial gains among Cuban-Americans even though he was open to revising Cuba policy. Mr. Crist also ran on a more open Cuba policy and won the Cuban-American vote in the exit polls last month. The fact that Mr. Crist’s advisers thought it strategic to emphasize the issue may be an indication of what their polling data showed.

The uninspired Republican response in prior campaigns may be telling in its own right. Republicans didn’t exactly blanket the Miami media market with ads about Mr. Obama’s Cuba policy, which might also be an indication of how they think the issue plays.

It’s possible that the issue ends up hurting Democrats. It’s just hard to see the signs of it today.