We bring the voice of Cuba, says President Diaz-Canel in New York

Posted on September 25, 2018 by Anthony Brenner 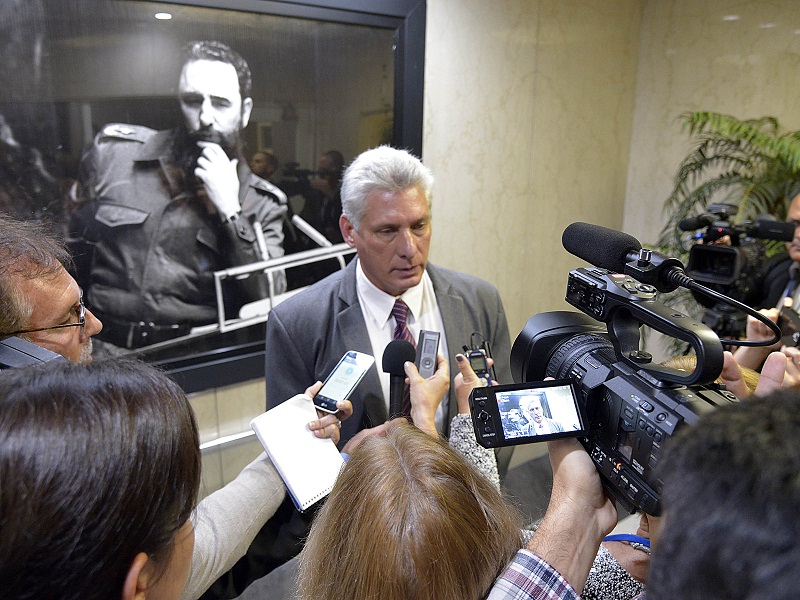 HAVANA, Cuba, Sep 24 (ACN) At the stroke of two o’clock in the afternoon, the President of the Councils of State and Ministers, Miguel Díaz-Canel, arrived at the Cuban Mission to the United Nations, located on the bustling avenue of Lexington.

“Upon arriving here in New York to participate in this session of the United Nations Assembly, the first thing to say is that many things come to one’s mind,” he said, quoted today by the newspaper Granma.

He then spoke – having in the background the image of a reflective Fidel on the United Nations podium in 1979 – of the memories of battle that have been kept since childhood in Cuba; and of how later – older now – “we had (those memories) with Fidel’s presence at the United Nations, and then with Raúl. Therefore, I believe that here too there is a mixture of emotions.

He declared that “we bring the voice of Cuba, which first of all comes to denounce the aberrant policy of the blockade, a policy that has already failed, that will continue to fail. It is the “blockade that has lasted the longest in the history of humanity, which has condemned generations born before and after the Revolution,” he denounced.

“With all force we are going to ratify this denunciation at a time when there is a setback in relations with the government of the United States; when there is an administration that has returned to the Cold War discourse, that has revitalized the Monroe Doctrine, and that, therefore, is an administration with which it is difficult to advance in a relationship between equals, also seeking a civilized relationship despite ideological differences. We also come to bring Cuba’s message: peace, solidarity, desires and aspirations to build a better world.

In his words, marked by emotion, Díaz-Canel did not overlook the will that encourages Cubans “to contribute as a small country, with our modest effort, to the construction of a better world that we are sure is possible.

From the President’s Agenda

Monday 24th:
He will speak at the morning session of the Nelson Mandela Peace Summit.

Wednesday 26th:
He will give a speech at the Commemoration of the International Day for the Total Elimination of Nuclear Weapons.

He will speak at the 73rd Session of the United Nations General Assembly General Debate.

He will meet with Antonio Guterres, secretary general of the UN and hold a dialogue with Bill de Blasio, mayor of New York.

He is expected to be received at the mythical Riverside Church in Harlem, where Fidel and Mandela were also welcomed.

He will hold bilateral dialogues with presidents and prime ministers from different parts of the world.

He will participate in solidarity meetings between friends of Cuba and Cubans living in the United States.