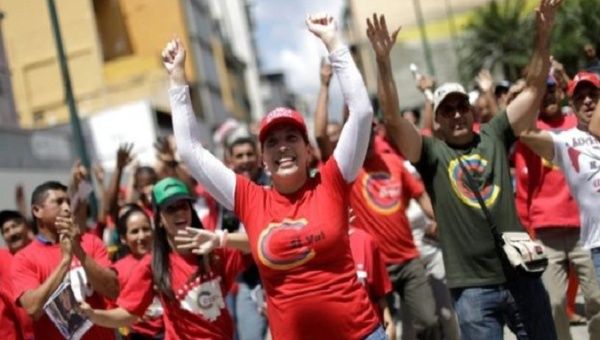 Supporters of the National Constituent Assembly in Caracas. | Photo: Reuters

Oct 26 (Telesur) – The National Constituent Assembly is set to announce its national economic plan as the ANC president said the plan, “will defend Venezuela,” warning “the imperialist forces: we won’t give you our salaries.”

Speculators continue to swarm the country’s economy, which is suffering from extreme inflation, but the ANC, the administration of Nicolas Maduro, and regional governments are combating predatory investors.

Delcy Rodriguez, the President of the ANC, said, “we will protect our nation, we will protect worker’s salaries … we will defend Venezuela against this economic war.”

The newly elected governor of the state of Guarico, Jose Vasquez, said he will combat economic “speculation and boycotts” against Venezuela, which he sees as an economic war on the country. He is determined to use his power to protect the people, adding, “this plan will counteract the ferocious onslaught of the Venezuelan right-wing with its international allies.”

Trump made the move to try to force a “regime change,” accusing the democratically-elected Maduro of creating a “dictatorship.”

The International Monetary Fund, known for pushing developing countries into debt with high-interest loans, is offering the Maduro government US$30 million annually with the said intent to stave off the high inflation. The IMF package would also require the government to restructure its bonds and change the way it collects these investments.

Venezuela cut ties with the IMF in 2007 in order to retain its economic and political autonomy.