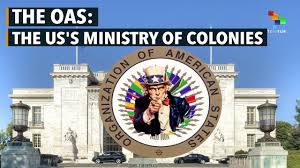 Caracas, Oct 9 (Prensa Latina) Venezuelan Attorney General Tarek William Saab denounced the continuation of coup plans by the right wing of the country with the support of the Organization of American States (OAS).

In the ceremony for the implentation of the Republic Plan for the protection of the regional elections, William Saab rejected the attempts of the opposition and its international allies to create institutions parallel to the legitimate government of the South American nation.

From Fort Tiuna in Caracas, the head of the Public Ministry stated that the removal by the National Constituent Assembly of his predecessor, Luisa Ortega, revealed the coup plot developed from abroad.

He also recalled that Ortega, with her inaction in imparting justice, was complicit in the violence registered in Venezuela from April to July, which left more than a hundred dead, thousands injured and large economic losses due to damages to public institutions and private businesses.

In this regard, the attorney general accused OAS Secretary General Luis Almagro as one of those who instructed this ‘terrorism agenda’ to try to overthrow President Nicolás Maduro.