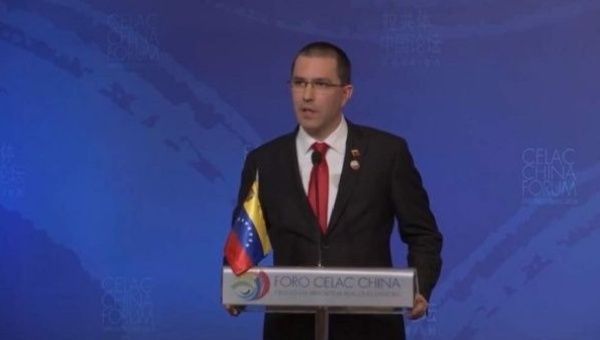 Jorge Arreaza said that the sanctions by the European Union are aimed at attacking the Bolivarian Revolution and its democratic institutions.

Jan 22 (teleSur) Venezuelan Foreign Minister Jorge Arreaza on Monday condemned the unilateral sanctions of the European Union (EU) and called on the bloc to rectify its interventionist position.

“It is regrettable that the European Union is put to the tail’s end of US imperialism, it is regrettable that the European Union has issued a series of restrictive measures against Venezuelan citizens, officials, but also presidents of public powers, that is, against Venezuela and its democratic institutionality democratic,” Arreaza said during the II Forum of Cooperation of the Community of Latin American and Caribbean States (Celac) and China.

Arreaza asserted that the EU violates international law by subordinating its foreign policy “to the imperialist, supremacist and racist US policy”

“Venezuela calls on the EU to reflect and rectify because our independence is sacred, our institutions legitimate,” he said.

Arreaza stressed that the EU’s arguments to impose sanctions are not to promote dialogue with the opposition, on the contrary “it is about attacking the Bolivarian Revolution, and attacking Venezuelan democratic institutions.”

He recalled that the undersecretary of State for Political Affairs of the United States, Thomas Shannon, had previously reported that “they instructed the EU with a package of sanctions against Venezuela.”

The Venezuelan diplomat said that his country will continue in the process of dialogue with the opposition, as well as progress in all areas of society.