Posted on December 3, 2017 by Anthony Brenner 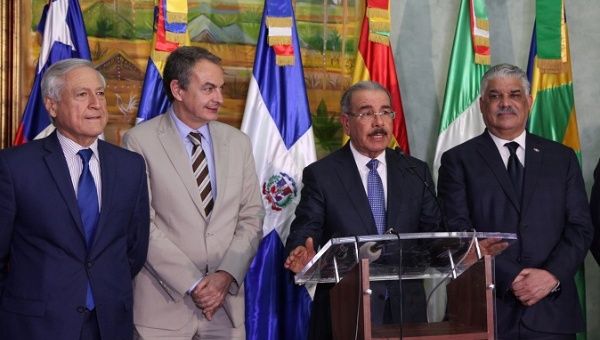 Nov 2 (Telesur) Representatives from the Venezuelan government and the country’s opposition have launched a second day of talks in the Dominican Republic, showing signs of advancement within the peace dialogue process.

He said the peace talks are advancing well and are on schedule. The talks, which began yesterday, are being mediated by current and former leaders of the Dominican Republic and attended by several other countries.

“An agreement of how to work together is what the Venezuelan pueblo is hoping for and I’m doing everything to make to make that happen.”

“We hope today brings a frank, direct and cordial discussion,” Rodriguez said in an early morning press conference in the Dominican Republic.

The government is asking for the opposition to end its collaboration with international governments that place santions on the Venezuelan government, making it difficult for it to stabilize the economy.

The opposition is looking to gain access to “humanitarian aid” from outside of the country and is demanding the release of hundreds of “political prisoners” they claim the government is holding.

The minister reminded the press that Venezuelan President Nicolas Maduro has attempted sit down and talk on “330 occasions” with the opposition over several years. These talks represent the latest phase in the government’s effort to engage in dialogue.

Dominican President Danilo Medina said the talks have been “positive” and “gone well” so far.

Rodriguez and the Venezuelan government hope these agreements will ensure that the opposition “abandons its violent methods to try to take control of the country.”

Some of the worst violence in Venezuela took place last April, when the opposition incited riots leaving 100 dead and causing millions of dollars of damage to public and private properties.