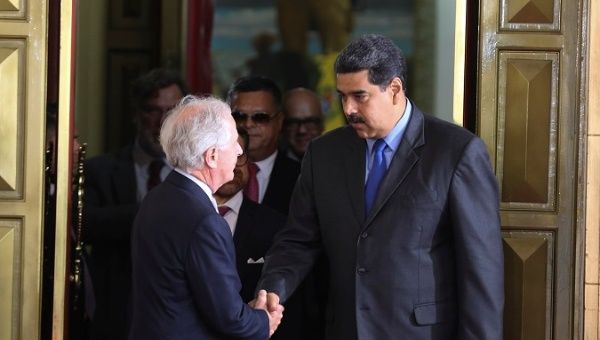 The decision is part of a dialogue agenda for better relations with the United States and to promote dialogue with the Venezuelan opposition.

May 26 (teleSUR) In a gesture to improve diplomatic relations with the United States and work towards a new political dialogue with internal opposition groups, the Venezuelan government has released U.S. citizen Joshua Holt.

The decision to release Holt, who was charged with espionage and the possession of illegal arms, was announced by Jorge Rodríguez, the Minister of Communication, and comes one day after Venezuelan President Nicolas Maduro met with U.S. Senator Bob Corker.

Speaking during a press conference Saturday, Rodriguez explained that release came after “a request on the part of U.S. senators to have Joshua Holt, who was charged with espionage and violence crimes, and his wife released.”

“This was done for the sake of peace, of national reconciliation and the objective of continuing efforts to maintain a respectful dialogue that will allow the opening of floodgates to prevent aggression, he (Nicolas Maduro) decided to encourage the Truth Commission of the National Constituent Assembly to take measures to benefit the freedom to these two,” he added.

He explained that officials accepted this request and that both Holt and his wife are flying to the United States.

Rodriguez said: “This type of gesture … allows us to consolidate what has always been our standpoint: dialogue, agreement, respect for our independence, respect for our sovereignty. If there is something that has characterized President Nicolás Maduro its the permanent spirit for dialogue.”

Holt, 26, was imprisoned in 2016 after Venezuelan authorities found an assault rifle and grenades during a raid at the public housing complex where he lived. He has denied the charges while insisting he traveled to Venezuela to marry a woman he had met online.

The meeting between Maduro and Corker, a Tennessee Republican and the chairman of the Senate Foreign Relations Committee, took place at the Miraflores presidential palace in Caracas. It came less than a week after the U.S., and its allies refused to recognize Maduro re-election, and days after the Venezuelan president expelled two U.S. diplomats for meddling in the South American country’s internal affairs.

On Saturday morning U.S. president Donald Trump tweeted announcing the “release of the American hostage form Venezuela.” Trump also confirmed Holt would be landing in Washington D.C. in the evening.

The Venezuelan foreign ministry explained the meeting was part of the government’s “agenda for dialogue for good relations with the United States.” However, U.S. Senator Marco Rubio said the U.S. government’s stance on Venezuela will not change.

After Maduro was re-elected on May 20, the U.S. government announced a new round of sanctions against the country. Earlier this year the Trump administration threatened Maduro’s government with an oil embargo and clarified they are not ruling out the “military option.”