UNGA Overwhelmingly Votes Against Cuba Blockade, All US Amendments Defeated

Posted on November 5, 2018 by Anthony Brenner 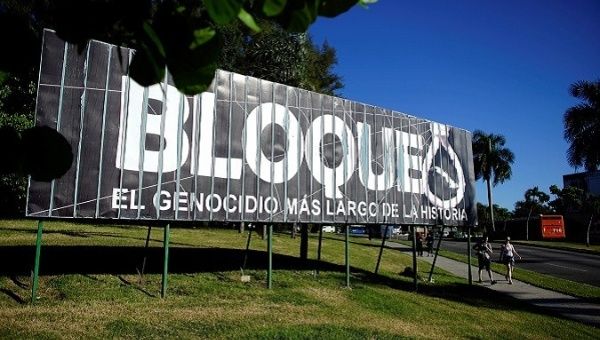 Israel and the United States were once again the only two countries to vote in favor of the brutal economic blockade against Cuba.

Nov 1 (teleSUR) United Nations member states voted 189 to 2 to condemn the nearly six-decade U.S. blockade of Cuba, Israel being the only country to side with the United States to maintain the economic blockade on the Caribbean nation.

Since 1992 the resolution to end the 1962 U.S. blockade has been voted on in the U.N. General Assembly and each year it is barely maintained thanks to the U.S. vote.

In a Wednesday night tweet, the U.S. mission to the United Nations asked member nations: “Every year Cuba puts forth a resolution that blames Cuba’s poverty, repression, and lack of freedom on the United States. Tomorrow the U.N. will hear what we have to say about that and countries will have to vote between Cuba or the U.S. Who will vote with us?”

Thursday morning the U.S. received its answer when the assembly voted nearly unanimously, 189-2, to end the blockade that has cost Cuba US$933 billion over nearly six decades. The assembly also voted down all eight of the U.S. resolution amendments that claimed that the blockade should continue because of Cuba’s supposedly “severe lack of access to information and freedom” and an “absence of women from the most powerful decision-making bodies.”

No abstentions were recorded.

Addressing the assembly prior to the vote, Cuba’s Foreign Minister Bruno Rodriguez called the blockade “an act of aggression and economic war that breaks international peace and order.”

The minister added that Washington is impeding Cuba’s ability to exercise its sovereignty and “violates universally recognized rules of trade and its freedom of navigation.” In 2017, 224 people per 100,000 inhabitants died in Cuba because of how the blockade limits the island’s access to adequate medicine and care, said the foreign minister. The World Health Organization has also called the blockade “unjust.”

As the Donald Trump administration has ramped up its hostilities toward Cuba since taking office in 2017 making economic transactions with Cuba more difficult, the EU has increased its support for the Caribbean country over the past year agreeing to increase trade by 2030.