U.S. Rep Kathy Castor and Cuba’s top diplomat to the United States pushed for improved relations with the island nation and greater economic ties between Cuba and the Tampa Bay region on Thursday.

José Ramón Cabañas, the head of the Cuban Interests Section in Washington D.C., made his first visit to the Tampa Bay area this week.

“Any kind of commercial or economic relations with Cuba is a two-way relationship,” he said. 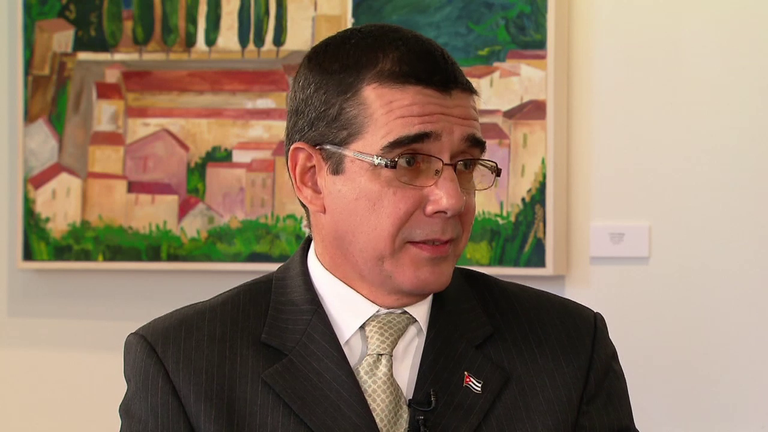 Cabañas was accompanied by Castor, the Tampa Democrat who has been a staunch critic of the U.S. embargo that bars trade with Cuba and restricts travel.

“Now is an important time for the U.S. to be more engaged with Cuba,” Castor said. “There are changes happening on the island and in the economy. They can own private property and own cars. They have small businesses, they’re in auto repair or they have their own restaurants.

The U.S. has no formal diplomatic relations with Cuba, which is why the Cuban mission is housed in the Swiss embassy in Washington D.C.

Cabañas was asked about his nation’s human rights record and its imprisonment of former U.S. subcontractor Alan Gross, who was arrested in 2009 on charges that he illegally provided banned satellite communications equipment to dissidents. A Cuban court sentenced Gross to 15 years in prison.

“Generally most Americans don’t know what’s going on in Cuba,” Cabañas said. He also noted that the U.S. has formal relations with other nations accused of human rights abuses, such as China.

In December, U.S. Secretary of State John Kerry said the two nations were discussing Gross’ situation. Cabañas said Thursday his government is willing to work with the U.S. but has been stymied by the lack of diplomatic relations.

“We have a willingness to face that problem, to talk about it, to find a solution,” Cabañas said. “But something has to happen from the other end. There has to be the political will to sit down and talk about it.”

Though there are no formal relations between the two nations, Cabañas said both sides have managed to work together on several fronts in recent years. Both have shared data on climate change and hurricanes and both signed an agreement that spells out how to handle oil spills in the Caribbean.

“In some cases we have accomplished something,” Cabañas said. “Of course we have differences between the U.S. and our government in several instances. But we have to face what we have in front of us.”

And that, Cabañas said, is increased travel between the two nations. In 2013, thanks to new travel policies Cuba, Cabañas said that nearly 300,000 Cubans traveled around the world. In turn, he said up to 400,000 Cuban-Americans visit the island along with 95,000 other Americans through the people-to-people licenses that allows U.S. citizens to visit Cuba legally.

It would be easier to travel between the two countries, Castor and Cabañas said, if the U.S. were to put more resources into its only Cuban mission and allow Cuba to expand its only mission here.

Cabañas also praised Tampa International Airport as a gateway to Cuba. Flights between Tampa and Cuba were restored in 2011 after a 52-year hiatus. Since then, more than 100,000 people have used Tampa to get to Cuba, many of them local Cuban-Americans whose only other choice in the state used to be to fly through Miami International airport.

Tampa’s reputation among those traveling to and from Cuba is much different from Miami’s reputation, according to Cabañas.

“We call the flights from Miami the Vatican flights,” he said, “because God only knows when you’ll arrive.”