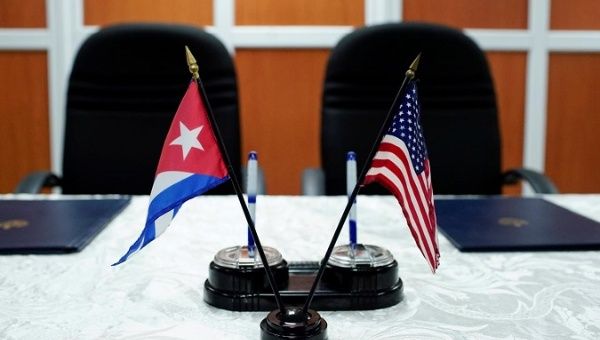 The U.S. blockade on Cuba is up for a vote again in the United Nations.

As the U.N. votes on the legitimacy of the U.S. blockade against Cuba, academics cast doubt on the measures used to determine damage from Cuba embassy sonic attack.

Oct 30 (teleSUR) The explanatory commentary and editorial published in Cortex on Oct. 9 and 13, 2018, is timely, given that the U.S. has, for quite some time, been ratcheting up its rhetoric against Cuba. The commentary and editorial in this new scientific publication appears as we approach the U.N.’s Oct. 31 vote on the blockade, when Washington is increasing its hostility toward Cuba, perhaps to justify its vote at the U.N. against lifting the blockade. The U.S. has desperately attempted to find pretexts to provide a basis for the alleged sonic attacks, for which the U.S. State Department directly or indirectly blames Cuba.

My article on this issue was published in teleSur on Sept. 4, 2018, based on an exclusive interview with Robert D. McIntosh, one of the two scientists from the Department of Human Cognitive Neuroscience, Psychology, University of Edinburgh, Edinburgh, U.K., whose joint study with Sergio Della Sala challenged the U.S. State Department-commissioned University of Pennsylvania report published in the Journal of the American Medical Association (JAMA). The interview with McIntosh was based on the report that was published in the European Journal of Neurology and found echo at the time among some mainstream media, such as The Guardian (U.K.).

In the scientific report they notably demonstrate, as quoted in the article, that the University of Pennsylvania report was “lacking in scientific rigour,” “unreliable” and “unsound.” The acceptable professional approach for cognitive tests is to measure individual performance compared with others in the population. And what is the standard measure accepted by the profession? A person must score in the bottom five percent to be considered impaired. The threshold needs to be this low to take into account a variety of factors. One is that only a very small proportion of the population is deemed to be impaired according to professional standards.

Yet, the University of Pennsylvania report arbitrarily defined the threshold at forty percent to be considered impaired, meaning that ipso facto four in 10 who take the test will be “impaired.” Thus, the Edinburgh scientists concluded in an understatement that “the 40% threshold is hardly a detail.”

The article in teleSur wrapped up as follows: “The University of Pennsylvania to date has never responded to the very specific issue of the 40% criterion, even though a very important portion of the U.S. State Department’s retaliatory measures against Cuba is based on the 40% baseline.”

Thus, the above-mentioned scientists joined together to publish, on Oct. 9 and 13, an explanatory commentary and editorial in the prestigious European-based international scientific journal Cortex. Founded in 1964 by Ennio De Renzi, it is devoted to the study of cognition and of the relationship between the nervous system and mental processes, particularly as reflected in the behaviour of patients with acquired brain lesions, normal volunteers, children with typical and atypical development, and in the activation of brain regions and systems as recorded by functional neuroimaging techniques.

In the introductory commentary, the two University of Edinburg original pioneers (Della Sala and McIntosh), in this quest for truth relating to the questionable methodology, are joined by the following:

The title of the commentary in Cortex says it all: “Cognitive Symptoms in U.S. Government Personnel in Cuba: The Mending Is Worse than the Hole.” The six scientists write that they have strongly criticized the University of Pennsylvania procedures as being inconsistent with any normal professional practice for evidence-based neuropsychology (Della Sala & Cubelli, 2018; Shura, Kacmarski & Miskey, 2018) and with statistical logic (Della Sala & McIntosh, 2018). They were therefore not shocked that the University of Pennsylvania study found all six patients to be “impaired.” They write that, when one employs the 40 percentile, 40% of people will fail each test and the chances of anyone passing all the tests without an impairment being diagnosed are negligible.

The stinging commentary points out that the University of Pennsylvania authors did not defend their “idiosyncratic” choice of a 40th percentile threshold. Rather, they implied that they used some other standard. In the same tone, they write that they are unsure what this ambiguous and unclear response means.

With a literary twist, they make their point by stating, “An old Venetian saying seems very apt here: ‘Xe pèso el tacòn del buso’ – the mending is worse than the hole.” The University of Pennsylvania specialists have attempted to devise an indefensible threshold for impairment reported in the original paper with a less coherent argument of their criterion in the rebuttal. Thus, the Cortex authors conclude in a doubtful manner that only two things are clear: first, the universally accepted criterion for cognitive impairment was misrepresented in the original University of Pennsylvania paper; and second, the neuropsychological data put forward does not support the conclusion that whatever happened in Cuba resulted in persistent cognitive decline.

The actual editorial published by the Cortex editorial board is titled “Responsibility of Neuropsychologists: The Case of the ‘Sonic Attack,’” Cortex Editorial Board.

In referring to the two contradictory statements, the original one and the rebuttal to the contending scientists from Europe and the U.S., both published by the University of Pennsylvania in JAMA, the Cortex editorial board takes up an important moral issue that affects the outside real world and the media: that the statements are not scientifically based.

The Cortex editorial writes that several ensuing critical comments in JAMA, from the scientists referred to above, underscored important and obvious glitches in the technical approach and resulting analysis and interpretation of the cognitive deficits reported in their JAMA paper. Seemingly aghast at this approach, the Editorial goes on to show that the University of Pennsylvania-based response to these criticisms was not to defend or explain the original methods, but to claim that the methods used were in fact different from those stated in the original paper (Hampton, Swanson & Smith, 2018). “The two descriptions of the methods, which are both highly questionable, cannot both be true: either what was reported in the original paper is false, or what is stated in the rebuttal is false (or possibly both).”

This editorial is concerned with the higher-level issue of how such self-contradictory statements could come to be published at all, let alone in an internationally recognized journal such as JAMA. One cannot allow, they write, such disoriented and incompatible explanations of process and scrutiny from being uncontested. Otherwise, it results in “a slippery path for science, and [is] dangerous for society at large.” Proving information about cognitive impairments, unsupported by science, “invites media coverage that may lead to widespread public misconception about the nature of this phenomenon.”

The Cortex editorial board appeals to neuropsychologists and all scientists to concern themselves with this case because of its wider implications. Cortex is straightforward: the University of Pennsylvania authors of the JAMA report “should now either publish an official erratum, to explain their actual methods clearly and unambiguously, or they should retract the original paper.”

It is my sincere hope that the international scientific community will respond even further to take up this case to show the arbitrary nature of the U.S. government actions against its own embassy in Havana, the Cuban mission in Washington, D.C., and the American and Cuban peoples affected by this incident.

What will the reaction of the U.S. State Department be in light of this latest scientific challenge?

Arnold August is Canadian author and journalist. His books include Democracy in Cuba and the 1997-1998 Elections (1999), Cuba and its Neighbours: Democracy in Motion (2013) and Cuba-U.S. Relations: Obama and Beyond (2017). As a journalist his articles appear in many web sites. He collaborates with teleSur. Follow him on Twitter and Facebook. Web site: www.arnoldaugust.com