HAVANA, CUBA — On a 90-degree morning in April, a AAAS-led group of U.S. scientists and policy experts stepped gratefully out of the tropical glare of a Havana side street and into the elegant, 18th-century headquarters of the Cuban Academy of Sciences [4]. 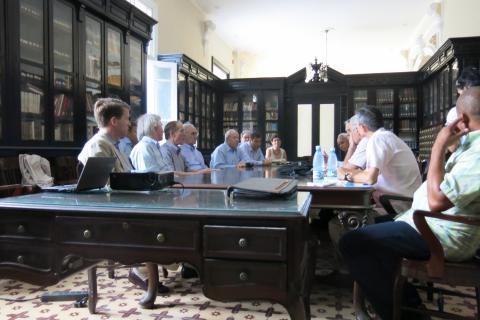 An AAAS-led group (left) meets with its hosts at the Cuban Academy of Sciences in Havana. (AAAS/Kathy Wren)

As the visitors were welcomed by their Academy hosts, it would have been impossible to guess from the warm hugs and hearty handshakes that the two groups were from countries whose governments have been at odds for over five decades.

The meeting was the first stop for the AAAS group on its three-day visit to Havana, where it would meet with a broad assortment of scientists and physicians across the city in an effort to further scientific collaboration between researchers in Cuba and the United States. The group also met with Chief of Mission of the U.S. Interests Section in Havana [5] John Caulfield, who expressed his support for the visit.

“This trip was a wonderful opportunity to reinvigorate the long-standing friendship between U.S. and Cuban scientists and to form a more specific plan of action,” said AAAS President Gerald Fink, who is also a professor of biology at the Whitehead Institute at MIT.

The discussions that began at the Cuban Academy of Sciences would give rise to a landmark agreement two days later. Signed by the leaders of the Academy and AAAS, a memorandum of understanding now outlines a plan to advance scientific cooperation by Cuban and U.S. scientists, in key areas of mutual interest to both countries.

A Long History of Cuban Science

Located in Havana’s old city, the headquarters of the storied Cuban Academy of Sciences was a fitting launch point for the visit. In an airy room lined with antique bookcases, the sounds of Cuba’s vintage motor vehicles rumbling through the open windows, Foreign Secretary and Executive Director Sergio Jorge Pastrana began the meeting by introducing the visitors to some of the luminaries in the history of Cuban science.

Established in 1861, the Academy was the first association of its kind in the New World. Its early members included Nicolás José Gutiérrez, the physician who introduced anesthesia in Cuba, Felipe Poey y Aloy, Latin America’s most famous ichthyologist at the time, and the renowned physician and scientist, Carlos Finlay, who first determined that yellow fever was spread by mosquitoes.

Although natural history was an active area of research in the 19th and early 20th centuries — much of it in collaboration with U.S. scientists at the Smithsonian and elsewhere — by the 1950s, very little laboratory research was taking place in Cuba. The country had just three public universities, and the Academy was supported by its own members, according to Pastrana.

That all changed with the revolution, which was followed by a period of intense capacity building in education, science and medicine, including a reorganization of the Cuban Academy of Sciences. The revolution’s leaders spoke often about the importance of investing in science and technology: “The basis of continuous development in the future years lies in an ever-developing scientific endeavor,” Che Guevara told the Academy’s Council in 1964, after visiting the newly inaugurated CERN in Switzerland.

Today, Cuba has a hardy biotechnology industry that exports a number of important vaccines, antibody-based drugs and other biomedical technologies. Its preventative health care is widely regarded as excellent, and both infant mortality rates and average lifespan [7] are roughly comparable to those in the United States.

The obstacles to scientific collaboration are formidable, however. The Cuban economy, which crashed after the dissolution of the Soviet Union, is still faltering despite modest economic reforms in recent years. The U.S. embargo blocks federal research funding from reaching Cuban scientists. And, while non-governmental U.S. scientists are permitted to travel to Cuba to conduct research under the U.S. Office of Foreign Assets Control’s general license, they must apply for a specific license to attend or organize most conferences there.

At the Academy and the rest of the AAAS team’s stops, the Cubans were clearly proud of what they and their colleagues have accomplished in a cash-strapped economy, with little access to information and resources from the United States. But several voiced frustration that U.S. regulations make it so difficult for U.S. scientists to attend most of the scientific meetings that take place in Cuba.

Such meetings, it was agreed, are an essential element of the scientific process in any part of the world: “In spite of political differences, scientists can always get together and talk,” said Pastrana.

Common Ground in the Life Sciences

Later that afternoon, the AAAS group visited Havana’s Hospital Hermanos Ameijeiras, which towers next to the seaside boulevard known as the Malecón. Leaders at this teaching and research hospital, which performs about 30,000 major surgeries a year, also expressed pride in the self-reliance of Cuba’s science and medical systems. Although though they can acquire “with much effort” medicines that are produced in the United States, one official said, some 80 percent of all therapies given to patients are produced in Cuba.

It was clear that the Cubans are well positioned to detect emerging infectious diseases of concern to the United States, such as dengue and chikungunya, serious mosquito-borne viral diseases for which no vaccines exist. Hospital leaders told the U.S. group that Cuba has already implemented surveillance measures for chikungunya, which has just turned up in the Caribbean in recent months. The virus is spreading rapidly in the region, raising fears among U.S. public health experts that it may soon make an appearance in the States.

Infectious disease is an excellent example of an area where AAAS should be encouraging cooperation between U.S. and Cuban scientists, according to Turekian. “One of the charges to a country’s scientific community is to help improve the lives of its citizens,” he said. “If a large amount of people could potentially be made sick by a disease coming up through the Caribbean, and we didn’t speak up about that, then we wouldn’t be doing our job effectively.”

Additional areas of common interest emerged the following day, at the Western Havana Bio-Cluster, a collection of over 50 institutions that encompasses both original research and the production and marketing of new technologies. Leaders from several of the main institutes at this biotechnology hotspot described research highlights in fields spanning neuroscience, agriculture and immunology.

Many Cuban accomplishments of this sector are well known; for example Cuba produces widely used vaccines for diseases such as meningitis B and hepatitis B, among others. But the experts also described several new areas of progress. A scientist at the Center for Genetic Engineering and Biotechnology (CIGB [8]) described a new, injectable drug for treating severe foot ulcers associated with diabetes, which often lead to amputation. The drug has performed well in clinical trials and is registered in a number of developed and developing countries, he said. Other CIGB scientists have developed a vaccine for serious tick infestations that affect cattle in the southwestern United States and Mexico and said they also have results on other diseases that are impacting U.S. agriculture, such as those affecting citrus crops and soybeans.

At the Center for Molecular Immunology [9], monoclonal antibodies are yielding positive results in clinical trials for a variety of cancers, including glioma, lung cancer and prostate cancer. During the AAAS group’s visit to this institute, the importance of scientific meetings re-emerged, as an early-career researcher described an upcoming meeting she had helped organize. Her enthusiasm was palpable as she described the unusually large number of U.S. scientists who were expected to attend.

“What Comes Next Is Pivotal”

On the final morning of the trip, in a pink and purple meeting room in the 84-year-old Hotel Nacional, where mobsters and movie stars once rubbed shoulders with intellectuals and heads of state, Alan Leshner, Gerald Fink, Sergio Jorge Pastrana, and Ismael Clark Arxer, the president of the Cuban Academy of Sciences, signed the agreement that would carry the momentum from the visit forward.
The memorandum of understanding identified four areas in the life sciences where AAAS and the Cuban Academy of Sciences will seek opportunities for sustained cooperation: emerging infectious diseases, brain disorders, cancer, and antimicrobial drug resistance.

“With this signing we are providing support for communities dealing with very similar problems,” said Pastrana.

Although AAAS has participated in several trips to Cuba before, in 1997, 2009 [10] and 2011 [11], “we had more institutional participation this time, including AAAS’ senior leadership,” said Turekian. “The success or failure of this partnership will now depend on building projects that are much more sustained, and in much greater depth.”

“Each of these theme areas has the potential for a workshop or conference that is truly collaborative,” where researchers can share information and make new discoveries together, he said.

For AAAS, a key focus now will be reaching out to U.S. researchers, including those in its 258 affiliated scientific societies, who may be interested in taking part in these efforts.

“We’ve opened the door. What comes next is pivotal,” said Agre.