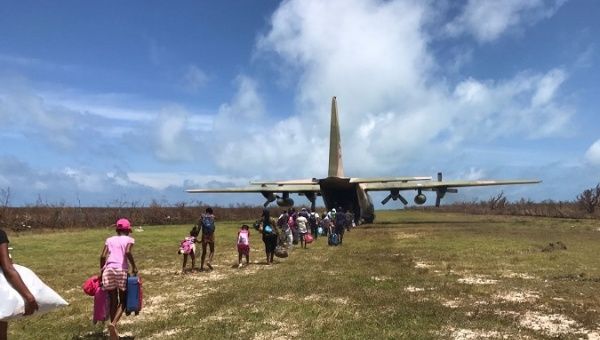 95 percent of the buildings on the island were damaged and many homes were left uninhabitable by the first storm.

Venezuelan planes are assisting with the evacuation of Barbudans as Hurricane Jose heads towards the Caribbean island.

400 people left by boat on Thursday and the rest of the population of 1800 are being transported to Antigua.

A Venezuelan plane brought 120 others out on Friday afternoon.

Barbuda was struck earlier in thia week by the full force of Hurricane Irma.

95 percent of the buildings on the island were damaged and many homes were left uninhabitable.

A group of young people in Barbados — inspired by the “internationalism” of both Venezuela and Cuba in the region — are helping the relief operation.

“Young Barbadian professionals who trained in Cuba … are responding to the devastation in the Caribbean north by Irma, which is now being threatened by (Hurricane) Jose,” David Comissiong, the founder and president of the Clement Payne Movement (CPM) told teleSUR.

Formed in 1988, the organization has long coordinated a Cuban scholarship program that has sent young Barbadians to pursue university education in Cuba, funded by Cuba’s Communist Party.

It is now these students that are organizing a mass collection drive on the island for those affected in Barbuda and Antigua — having called on both the CPM and the Venezuelan embassy in Barbados to help with their efforts.

“And of course the Venezuelan embassy responded almost immediately,” said Comissiong, saying that Venezuela will provide aircraft to carry the collected supplies over from Barbados to Barbuda and Antigua.

“And with the help of Venezuela, we are confident we will be able to transport whatever materials we collect to affected countries,” he added.

For Comissiong, one message must be made clear: that despite Barbuda and Antigua being independent countries — unlike places such as Sint Maarten and the U.S. Virgin Islands, that remain colonies — Venezuela has responded faster with assistance than the “colonial masters” of France and the United States.

“And from a political point of view, it is very important that the right message be sent: that if you decide to be independent and end a colonial relationship, that does not mean you’re going to be alone and vulnerable and without assistance,” said the leader, who is also a lawyer.

“It was Hugo Chavez that (inspired) a new philosophy of international relations: that you could have a set of … relations based on solidarity and sharing one’s resources, and Venezuela has exemplified that,” he added, recalling the legacy of late Venezuelan President Hugo Chavez.

The collection drive on the island is slated to take place over the next five to six days. The young people leading it, said Commissiong, are invoking the lessons of their university training in Cuba — the “value system of internationalism, of solidarity.”

“I want to thank Venezuela for being there for us in the Caribbean, for proving to be such a great friend of the Caribbean,” he pressed.

Venezuela became the first country to send a brigade of civil protection and humanitarian aid to the islands on Thursday.

One local resident Sonya Thomas told teleSUR about her experience during Hurricane Irma.

Just weeks ago, Venezuela pledged to donate US$5 million to help with recovery efforts in areas devastated by Hurricane Harvey in the U.S. state of Texas.

The country also provided free gas to rescue workers, firefighters and police in their efforts to help victims affected by the storm, through Citgo Holding Inc., a subsidiary of the state oil company, Petroleos de Venezuela.

In addition, the firm has promised US$3 million in aid for the Mayor of Houston’s relief program.