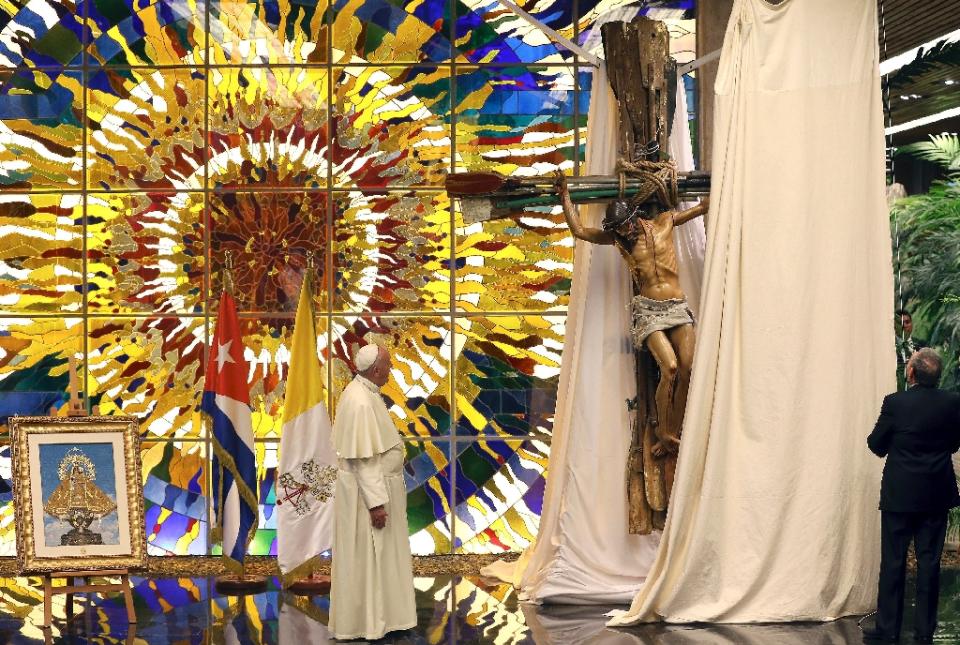 VATICAN CITY (RNS) Pope Francis has decided to donate a crucifix given to him by Cuba’s president, Raul Castro, to a parish at the forefront of the European refugee crisis.

Francis will give the crucifix to parishioners on Italy’s southernmost island of Lampedusa, where thousands of refugees and migrants have arrived in recent months.

Standing more than 9 feet tall, the crucifix is made of wooden oars, as a symbol of migration. Crafted by the Cuban artist Kcho, it was given to Francis by Castro during the pontiff’s official visit to Cuba in September.

The decision to send the crucifix to southern Italy was announced by Cardinal Francesco Montenegro of Agrigento, the Sicilian city whose archdiocese includes Lampedusa, the Vatican’s official news site reported.

The crucifix will go on display in Agrigento for the start of the Vatican’s Jubilee Year in December, before being taken on a pilgrimage around the diocese and onwards to Lampedusa.

Francis chose the tiny island for his first trip outside of Rome after being elected pontiff, visiting Lampedusa in July 2013. The pope went to great lengths to draw attention to the plight of refugees and migrants, giving a homily from an altar made from a wooden boat and casting a wreath out to sea in memory of those who have died trying to reach Europe.

So far this year 3,460 people have been recorded as dead or missing attempting the dangerous sea journey, while 806,000 have arrived on European shores, according to figures from the UN refugee agency (UNHCR).

The pope’s decision to donate the crucifix — once again drawing attention to Lampedusa — came as European and African leaders gathered in Malta this week to discuss migration. The EU is also in ongoing discussions with Turkey about how to manage the movement of people to Europe.

By Rosie Scammell RNS, The Gazette