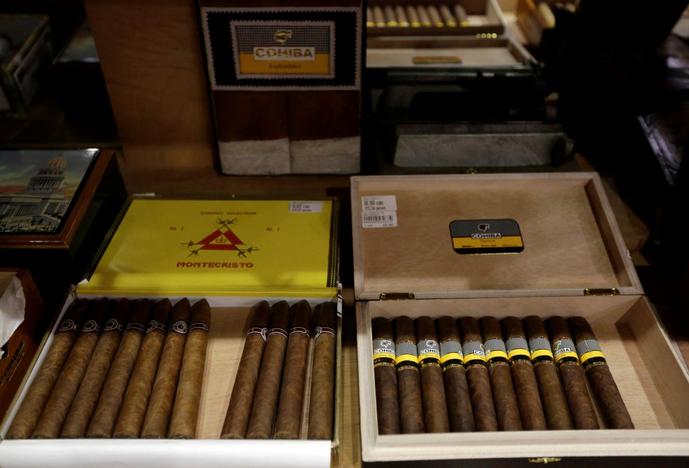 WASHINGTON/HAVANA Americans traveling to Cuba will be allowed to bring home more of the communist-ruled island’s coveted cigars and rum under new measures announced by the U.S. government on Friday to further ease trade, travel and financial restrictions that have been in place for decades.

Cuba welcomed the steps, part of President Barack Obama’s effort to make his historic opening to Cuba “irreversible” by the time he leaves office in January, but said they did not go far enough.

The latest in a series of new rules since the former Cold War foes began normalizing relations in 2014 will allow Cubans to buy certain U.S. consumer goods online, open the door for Cuban pharmaceutical companies to do business in the United States and let Cubans and Americans do joint medical research.

For American travelers, the biggest change is the removal of limits on the amount of rum and cigars they can pack in their luggage, strictly for personal use.

“You can now celebrate with Cuban rum and Cuban cigars,” U.S. National Security Adviser Susan Rice quipped as she laid out the policy changes in a speech to a Washington think tank.

U.S. law still bans general tourism to Cuba, but the administration has used previous regulatory packages to make it easier for Americans to visit the island under 12 officially authorized categories.

The latest measures are part of an executive order on Cuba through which Obama seeks to sidestep the Republican-controlled Congress, which has resisted his call to lift Washington’s economic embargo after more than 50 years.

Republican critics say Obama is making too many concessions to Cuba for too little in return, especially on human rights issues. “After two years of President Obama’s Cuba policy, the Castro regime has made out like bandits,” said U.S. Senator Marco Rubio, a Cuban-American lawmaker from Florida.

Also under the new rules, after docking in Cuba, some foreign ships carrying certain cargo will be permitted to travel directly to U.S. ports to load or unload freight. Until now, such vessels have been required to wait 180 days, a restriction that Cuban officials say hinders their import export trade.

Josefina Vidal, the Cuban Foreign Ministry’s chief of U.S. affairs, told a news conference in Havana the measures were “positive but of a very limited nature”.

“Today, I approved a Presidential Policy Directive that takes another major step forward in our efforts to normalize relations with Cuba,” Obama said in a statement.

Less than a month before the Nov. 8 presidential election, Obama said his goal was to “make our opening to Cuba irreversible.”

The latest package, the administration’s sixth, is likely to be the “last significant tranche of changes” during Obama’s tenure, said a senior official, who asked not to be named.

Vidal criticized Obama’s directive for making it clear the U.S. aimed to “promote change in Cuba’s economic, political and social system”, failing to respect its sovereignty.

In March, Obama made the first visit to Havana by a U.S. president in 88 years. His trip was made possible by his breakthrough agreement with Cuban President Raul Castro in December 2014 to cast aside decades of hostility that began soon after Cuba’s 1959 revolution.

Since the opening, Obama has repeatedly used his executive powers to relax trade and travel restrictions, while pushing Cuba to accelerate market-style reforms and boost political and economic freedom.

“The changes announced to Cuba regulations are, by definition, significant because they are new,” said John Kavulich, president of the U.S.-Cuba Trade and Economic Council. “Whether they will be relevant depends upon the government of Cuba’s willingness to permit United States companies and institutions to engage.”

“This new directive consolidates and builds upon the changes we’ve already made,” Obama said. He added, however, that “challenges remain – and very real differences between our governments persist on issues of democracy and human rights.”

At the same time, the U.S. embargo against Cuba has remained in place, a major irritant in relations. Only Congress can lift the embargo, and the Republican leadership is not expected to allow such a move anytime soon.