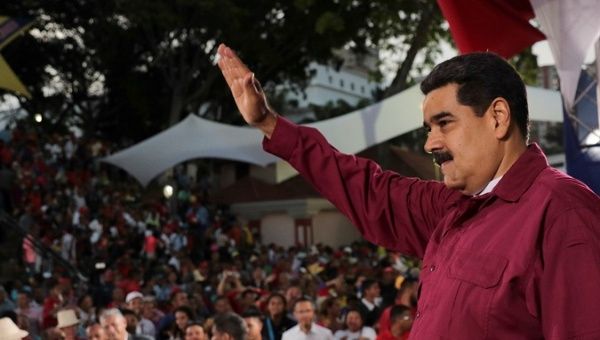 April 14 (teleSUR) Venezuela‘s President Nicolas Maduro has described this year’s controversial VIII Summit of the Americas as a “complete failure” during a speech at a rally in Caracas.

“Everyone who attacks Venezuela ends up losing; the Summit of the Americas has been a complete failure,” said Maduro, whose invitation to the April 13 and 14 conference was rescinded by Peru‘s President Pedro Pablo Kuczynski. Kuczynski was later forced to resign amid a sprawling corruption scandal.

“I was seeing reports of some empty speeches by right-wing, unpopular, murderous, imperialist lackey presidents,” Maduro said during his Saturday speech. “It’s shameful seeing those presidents, hated by their peoples, speak about Venezuela‘s noble people.”

The summit fell into crisis when U.S. President Donald Trump canceled his attendance, subsequently authorizing airstrikes on Syria in conjunction with the United Kingdom and France.

Maduro condemned the airstrikes in his speech: “Violating international law, they launched missiles to inflict panic and terrorism on Syrians and destroy scientific centers. There has been powerful global revulsion around the planet.”

U.S. Vice President Mike Pence, who attended the summit in Trump’s place, used the opportunity to push for greater sanctions against Venezuela, saying Washington would not sit “idly by.” Pence also announced on Saturday that the United States is seeking to host the next Summit of the Americas.

Besides being overshadowed by the strikes against Syria, the summit was dominated by discussions of the Trump administration’s trade war against China.

U.S. Commerce Secretary Wilbur Ross told the summit that Washington would not “cede leadership” to China in Latin America.

On Thursday, Trump also ordered economic advisers to consider rejoining the Trans-Pacific Trade Partnership (TPP) which he had previously pulled out of, describing it as a “rape” of the United States.