Joint Cuban, US Probe Finds No Evidence for “Sonic Attacks” 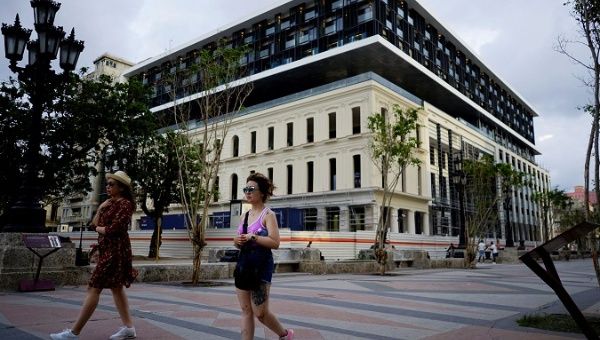 Tourists pass by a hotel under construction at the Paseo del Prado boulevard in Havana, Cuba, May 9, 2018. Picture taken on May 9, 2018. | Photo: Reuters

The Cuban ministry of foreign affairs issued a statement calling on the U.S. government to stop the “political manipulation” of the alleged health issues.

July 11 (teleSUR) A fourth meeting was held in Washington D.C. Tuesday between authorities from law enforcement agencies from Cuba and the United States, the Cuban foreign ministry said adding that joint investigations by the agencies from both countries found no evidence for the alleged sonic attacks against U.S. diplomats in Havana.

The statement said that “the Cuban delegation urged the U.S. government to desist from the continued political manipulation of the alleged health incidents that became a pretext to adopt new unilateral measures that affect the operation of the respective embassies, particularly, the rendering of consular services depended upon by hundreds of thousands of people.”

The ministry also said that the joint investigations “by specialized agencies and experts from Cuba and the United States for more than one year confirmed that there is no credible evidence or hypothesis or science-based conclusions that justify the actions taken by the U.S. government against Cuba to the detriment of bilateral relations.”

Following such findings by agencies from both countries, the Cuban side urged the United States government to stop its hostile behavior and “political manipulation” towards the Caribbean country using “the alleged health incidents that became a pretext to adopt new unilateral measures that affect the operation of the respective embassies, particularly, the rendering of consular services depended upon by hundreds of thousands of people.”

The meeting was concluded with an agreement to “continue with this dialogue and to keep holding the technical meetings between the law enforcement agencies from both countries to bring bilateral cooperation to fruition,” the statement of the Cuban ministry said.

Last year, so-called ‘sonic attacks’ led to the withdrawal of U.S. diplomatic staff in Cuba, after 24 staff displayed concussion-like symptoms, according to the State Department. No evidence was ever found to support the allegations.

The incident led to heightened tensions between the two countries and coincided with the United States’ souring of bilateral relations after several years of openness under Barack Obama.