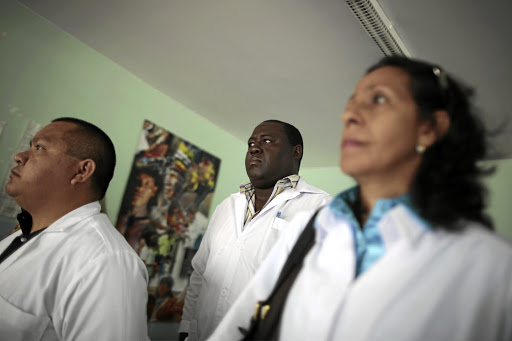 Life and death: Foreign doctors, mostly Cubans, involved in a Brazilian programme visit a shelter. The death rate in Brazil, which uses the Cuban system, is better than that of the US and UK. Picture: REUTERS

In July, 1,000 more South African medical students who have spent five years studying medicine in Cuba will return to complete their sixth year, graduate and start practising as doctors.

If I had my way, I would send them all to the Eastern Cape, train them for their final year and employ them in the province once they graduate.

These are precisely the kinds of doctors needed throughout the province and country, because Cuba’s excellent medical schools pursue a comprehensive approach that focuses equally on the four pillars of medicine — disease prevention, health promotion, treatment and rehabilitative medicine.

The Cuban system produces well-rounded specialist family physicians who are appropriately trained for South Africans’ medical and health needs. They are trained to practise in diverse communities, from the cities to the deep rural areas.

The system also produces super-specialists, such as Dr Khanyisa Makamba, who was among the first cohort of South Africans to be trained in Cuba and subsequently went on to specialise in urology in SA. He is now head of urology at the Port Elizabeth Provincial Hospital. He could practise anywhere in the world but he has a strong social commitment and he chooses to use his skills in his home province to help the many public sector patients who cannot afford private medical care.

“As a paediatric cardiologist and health sciences academic, I was sceptical about this approach until I visited Cuba in 2017 and the penny dropped regarding the appropriateness of comprehensive medical training to SA’s needs”

SA can and should learn from Cuba, where 80% of medical practitioners are comprehensive or specialist family physicians and only 20% are specialists in other areas of medicine or are super-specialists. In SA it is the reverse, with many in private practice or emigrating.

SA sent medical students to Cuba in the first instance because the country is simply not producing enough doctors. The Department of Health looked at the number of doctors produced by universities and realised that producing fewer than 2,000 doctors per year was not matching the rapid population growth and these numbers could never reach a ratio of two doctors per 1,000 population. The department therefore increased the number of doctors by sending many more students than in previous years to study in Cuba from 2012, as per the Nelson Mandela-Fidel Castro Medical Collaboration.

There was much resistance from us as medical academics regarding sending students to Cuba. One of the major reasons for this is that training in SA is mainly suited for practice in the West, hence graduates are able to work internationally. What is not adequately addressed is whether they are trained to meet the health needs of the majority in SA. And what does the majority require?

In developing the curriculum for the country’s newest medical school, Nelson Mandela University has taken great pains to address this question. What has informed its curriculum, which also informed Health Minister Aaron Motsoaledi’s decision to have our students trained in Cuba, is the need for medical students to be trained in a comprehensive manner. That is, not only with a curative or treatment emphasis, which is the main approach in SA, but with an equal emphasis on health promotion, disease prevention, treatment and rehabilitative medicine.

As a paediatric cardiologist and health sciences academic, I was sceptical about this approach until I visited Cuba in 2017 and the penny dropped regarding the appropriateness of comprehensive medical training to SA’s needs. The efficiency and professionalism of their system speaks for itself in Cuba’s health statistics: life expectancy in Cuba for the population is superb at about 80 years, while SA’s is about 60 years; infant mortality is two per 1,000, while SA’s is 30-40 per 1,000.

How did they get it right? Through their comprehensive healthcare system, based on the four levels of care, everyone in the health system focuses on advancing health rather than only on treating disease.

Home-based care and local clinics are efficiently aligned to polyclinics, or what are called community health centres in SA. Every polyclinic has a section of complementary medicine — including acupuncture, homeopathy and traditional medicine — and each patient is advised on the relative merits.

Every polyclinic has as a basic minimum a comprehensive or specialist family physician-nurse team and a range of health professionals, as well as necessary equipment, including X-ray machines, certain laboratory facilities and ultrasound.

These are efficiently matched with secondary hospitals (district, regional and tertiary hospitals in SA) and national institutes that specialise in specific diseases, such as neurological diseases and oncology.

There are similarities between the structure of the Cuban public health system and SA’s system, but there are also stark differences, notably in Cuba’s far superior level of efficiency, professionalism, staffing, equipment and national emphasis on the four levels of care.

To cover all four levels, the entire health team plays a key role, starting at the community level where it is the role of community health workers to visit every individual in their area and to ensure that every individual goes for a medical check-up at least once a year, and to identify any health issues and why, for example, they have not gone to the clinic for their regular check-up.

They work with a team of health professionals, from doctors and physiotherapists to psychologists and dieticians to focus on all four levels of care.

In SA, with National Health Insurance in the wings, the country has to look at new health system models, such as Cuba’s. While SA is well recognised for training world-class healthcare practitioners and it is important to maintain the country’s high standards, it should also introduce new population-wide approaches to health. This includes increasing taxes on substances that can undermine health, such as tobacco, alcohol and sugar.

In terms of GDP, most countries spend 10%-15% on health, with the US at 15%. SA spends 8% and only half of this is spent on the 84% of the population that is without private medical aid.

The private medical aid industry has a R160bn turnover per year in SA, and this is spent on only 16% of the population.

As a nation SA has to start looking after the health of the 84% of the population in far more comprehensive, holistic ways and the four pillar system is the best population-wide and budget spend approach.

SA should therefore embrace the medical students when they return from Cuba and ensure they get the best possible reintegration assistance into medical schools throughout SA.

There is so much more SA can do to improve population health, quality of life and length of life, and these students can help the country to achieve it.