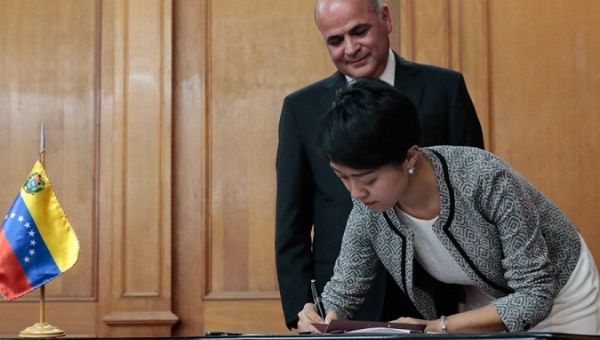 WIth the financial support of both foreign and native businesses, production may increase to 6 million before 2019. | Photo: Twitter / @PresidencialVen

Seven of the 14 oil contracts have been signed as part of an initiative to develop Venezuela’s Orinoco Oil Belt.

Seven of the 14 oil contracts have been signed as part of an initiative of the state’s oil company, Petroleos de Venezuela (Pdvsa), to develop Venezuela’s Orinoco Oil Belt, the president announced, following a meeting with a group of entrepreneurs.

“This is a recovery plan for oil wells that are inactive due to the United States’s sanctions towards Venezuela. Investment facilities will be provided to companies that contribute their resources,” said Maduro.

“The incorporation of technology and investment contribute to the recovery of production and will increase to 641 thousand barrels of oil per day in 14 wells, which will total more than 1.25 million barrels per day,” said the president.

The current plan is to increase production in intervals of a million barrels to reach 6 million before 2019.

Despite the difficulties of the last three years which included unstable oil prices, corruption, and the financial blockade instituted by the United States, the Maduro administration is confident that the recovery plan will return the economy to its former glory.

“The time for comprehensive economic recovery has arrived,” Maduro said, reminding investors that Venezuela’s Gold Savings Plan is scheduled to start next week.