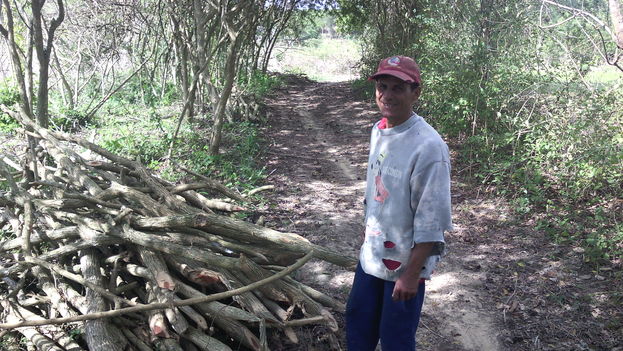 HAVANA, Aug. 19 (Xinhua) — Formerly considered as tough low-paid work that held interest for only the poorest peasants, small-scale vegetable coal production is gaining ground in Cuba thanks to its growing export potential.

Cubans first became aware of how difficult it was to make charcoal after the 1959 Revolution, when they learned poor peasants in the countryside employed the most rudimentary methods to make vegetable coal.

Sadly famous were the coal men of Zapata Swamp, Cuba’s largest wetland, in the central province of Matanzas, where Fidel Castro became an almost daily presence upon his arrival in power.

Now, more than half a century later, the production of vegetable coal has taken off again due to marabou, or sickle bush, an invasive plant that spread like wildfire over thousands of hectares of former cropland.

A national campaign to rid Cuba of marabou led to the rebirth of vegetable coal production, with cooperatives and state-owned companies keen to make the most of the low-cost and pervasive raw material.

Some 135 square meters of marabou-covered terrain can yield around 140 tons of vegetable coal for export, which fetches about 47,000 U.S. dollars, according to the international market price of between 330 and 380 dollars a ton.

In January, Cuba made its first export shipment to the United States in half a century, sending 40 tons of marabou coal.

Two containers of charcoal were shipped from the Mariel container terminal near Havana to Port Everglades, in the U.S. state of Florida.

The sale was the result of an agreement between U.S. company Coabana Trading LLC, a subsidiary of Reneo Consulting, and CubaExport. The two companies agreed on the sale price of 420 dollars a ton, above the market value.

Cuba’s leading marabou coal producer is Agroindustrial Ceballos, in the central province of Ciego de Avila, which in the past 11 years sold more than 200,000 tons, mainly to Spain and Italy, but also to Germany, Britain, Saudi Arabia, Syria, Turkey and Israel.

Cuba’s largest vegetable coal plant is located in Jobabo, in the eastern province of Las Tunas, and it has the capacity to process 20 tons a day.

The island exports 80,000 tons of vegetable charcoal annually, with production and sales abroad expected to grow.

Just a few days ago, Agriculture Minister Gustavo Rodriguez said Cuba should increase charcoal production to take advantage of the increasing demand in Europe and the United States, and at the same time help rid Cuban fields of marabou.