Exploring Cuba by land and sea an enriching experience 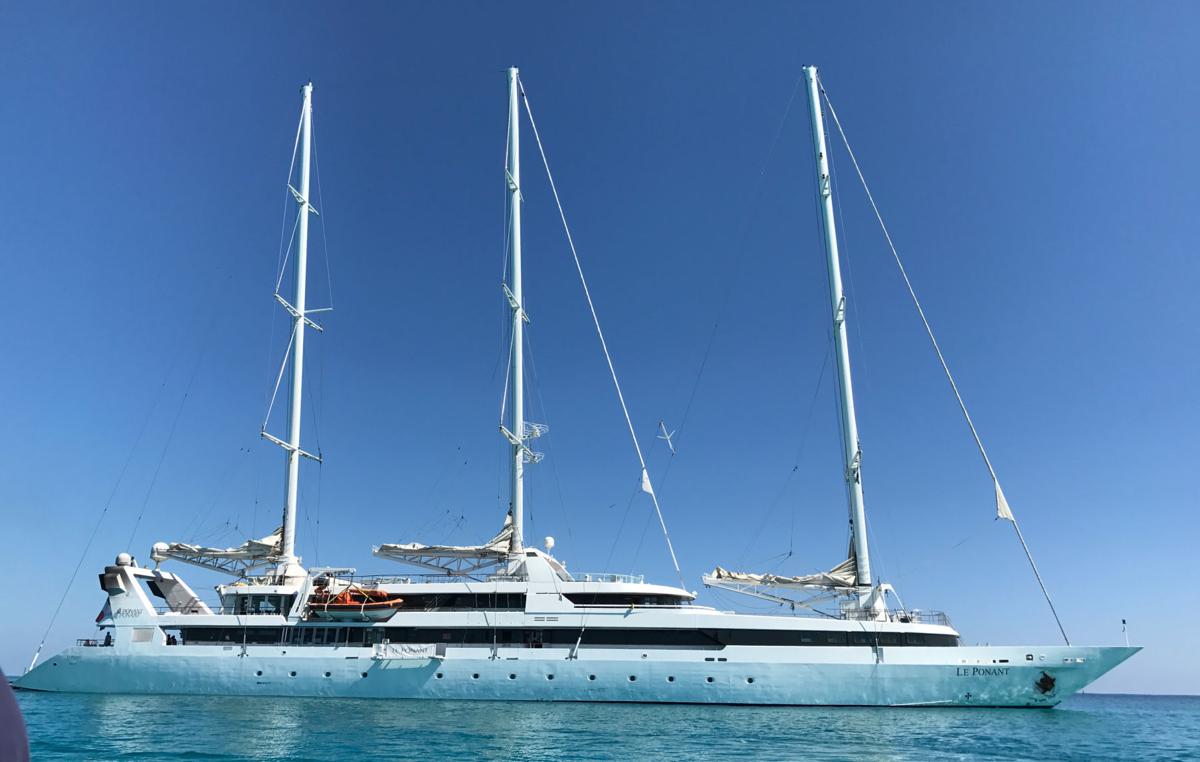 In March, my husband and I traveled to Cuba as part of a New York Times Journeys tour. Our mode of travel was a beautiful three-masted sailing ship, Le Ponant, which carried 53 passengers. The shallow draft of this ship allowed us access to small ports and a series of unique experiences.

Among our group were two former Times reporters: Anthony DePalma, an expert on Cuban history and politics; and Erica Goode, who had covered environmental concerns in the region. Their insights and lectures gave us a fuller understanding of what we saw and experienced.

That background, combined with the people-to-people experiences that shaped our itinerary, allowed us to go beyond mere sightseeing to gain a better grasp of the reality of life in Cuba today.

This was a perfect time to experience Cuba before the inevitable impact of increasing numbers of foreign visitors and businesses (even if not from the U.S.) dilutes some of its rich culture and heritage. President Trump’s announced changes in policy, undoing the opening created by former President Obama, dictates that most travelers can no longer travel alone. Instead travelers must go with a licensed tour group and be included in one of the 12 categories of authorized travel, including people-to-people exchanges, which will be more strictly enforced.

From the moment we landed in Havana, we entered a time warp of sorts. Just 90 miles across the Straits of Florida we were immersed in a culture and people that, though familiar, are unique and distinctive.

And intriguing. And challenging. And warm and welcoming. And in most ways untouched by American influence since the early ‘60s. In a sense, it was like visiting a living museum.
Without exception, the Cuban people we met were eager to share their perspectives. Some were proud to be part of the revolution; others were frustrated by their poverty and lack of progress; some saw the United States as an oppressor; others wanted access to what they perceived as our life style. Virtually all welcomed closer ties with our country.

Our first stop was lunch at the elegant Hotel Nacional, on a hill overlooking the Gulf of Mexico. This historic art deco hotel dates from the 1930s and is a business and cultural center whose conference rooms are filled with photos of the famous (and infamous) who have stayed there … a veritable who’s who of arts, culture, and politics of the past 85 years, including Frank Sinatra and Winston Churchill.

The hotel, though magnificent, could have been anywhere in Latin America until you notice the vintage autos parked in front. The cars are mobile works of art that evoke fond memories for those of us raised in the ‘60s.

Most are in mint condition — at least on the outside. Just don’t look under the hoods at the jerry-rigged engines. Parts have been very hard to come by since the blockade began in the early 1960s. Beyond being points of pride for their owners, they’re also a source of income for Cubans who can now secure licenses to earn some good money as guides for tourists.

Old Havana gave us a better sense of Cuba itself, a country that is filled with contradictions. Narrow streets. Beautifully preserved old buildings. Street cafes and vendors. A magnificent basilica converted into a concert hall and museum with a moving shrine to Mother Teresa. A view of the old lighthouse that welcomes you to the port of Havana.

But there are also droves of decaying buildings. In fact, according to DePalma, one old building collapses each day because of a lack of funds to rehab them.

A large billboard along the highway clearly reminded us again that we’re in Cuba. It read: Bloqueo: El genocidio mas largo de la historia (Blockade: the longest genocide in history). The final ‘o’ in Bloqueo is in the shape of a noose.

This bit of hyperbole certainly made the Cuban government’s perspective clear, despite the easing of sanctions at that time. As our tour guides frequently told us, “It’s complicated!”
Our first two ports were devoted largely to the government’s efforts to preserve fragile ecosystems and species of great importance to Cuba.

At Punta Frances on Isla de la Juventud, a large island off the southwestern coast of Cuba, we visited a fresh water pond surrounded by mangrove trees just a few hundred feet from the ocean. Among the flora our guides pointed out was a small bush whose leaves, according to legend, enhances men’s sexual prowess. It was picked practically bare.

We snorkeled over a small reef off shore that Cuban marine conservationists are working to preserve along with the more famous large reef, Jardines de la Reina, which was one of Fidel Castro’s favorite places to visit, a site whose access is greatly restricted.

Cayo Largo del Sur, a small island east of Juventud, featured rich wildlife, including turtles and a variety of birds. We visited the nearby Conservation and Ecology Center where the director showed us their efforts to protect the endangered Cuban Green Sea Turtle.

The team at the Center harvests eggs laid in nests dug in the sand on the beach each season, then, once the babies have hatched, lovingly ‘herds’ most of them back to the sea, keeping a few dozen babies to nurture in protected tanks until they reach 18 months of age, when they’re then released to the sea with the greatest chance of survival.

We also learned about limitations of the healthcare system in Cuba from doctors at the local clinic. Although all Cubans have access to free health care, on this tiny island anyone with a serious illness or even a woman about to deliver a baby must be flown to Havana.
A side note from one of DePalma’s lectures was an insight into how doctors not only provide preventive care to every Cuban, but also support the Cuban economy.

Education is free in Cuba and thousands of young people become physicians. Most of them are required to spend two years in Venezuela, Brazil, or another country friendly to Cuba; in exchange, the Venezuelan government pays the Cuban government millions of dollars each year for their services. The doctors, however, get only a portion of that money. The rest goes to the Cuban government, which earns an estimated $8 billion a year from this unusual method of exporting one of Cuba’s “natural resources.”

We were able to spend some quiet time on these two islands enjoying the pristine and beautiful beaches, a pure white expanse that felt more like baby powder than sand.
But it’s important to note that even with the more relaxed visa process President Obama established, Americans still couldn’t visit Cuba just to spend time at one of the luxury beach resorts along the north shore. Even under President Trump’s revised Cuba policy, people-to-people educational programs are a requirement.

The two large towns we visited gave very differing impressions of Cuba. Cienfuegos is a UNESCO World Heritage Site largely because of its layout and design. With a large central square, it is said to be the best example of 19th century urban planning in Spanish America. The square itself is dedicated to José Martí, the Cuban poet who was an inspirational leader of the Cuban movement for independence from Spain.

A man sat in the square strumming his guitar and softly singing a tune. Although he seemed to be playing largely for himself, he was most appreciative of my small thank you of a few CUCs, the international monetary unit of Cuba. It’s worth far more than the national currency, the CUP, which the locals used among themselves.

Lovely Spanish/Moor influenced buildings lined the waterfront, phenomenal for the intricacy of the exterior patterns and beautifully preserved and maintained.

Santiago de Cuba was more cosmopolitan, with a historic central square bordered by a house dating from 1522, a 16th-century cathedral, a large hotel, and the town hall where Fidel Castro proclaimed the victory of the Cuban Revolution on Jan. 1, 1959.

Santiago de Cuba also preserves the Moncada Barracks, site of an attack led by Castro on July 26, 1953, that is considered to be the beginning of the Cuban Revolution.

For me, though, the heart and soul of Cuba was captured in our visit to the crown jewel of Cuba’s colonial towns, Trinidad, which is also a UNESCO World Heritage site.

Cobblestone streets throughout the center of town, galleries and music everywhere, a neighborhood restaurant that roasts a suckling pig each day, history museums and a Russian-made tractor that dates to the 1950s, if not before.

However it was the human interactions that made Trinidad especially touching and educational. We visited a woman whose home is listed on Airbnb. She obtained a license in one of the 201 private business categories the Cuban government allows, which makes it possible for Cubans to legally have a second career in addition to their formal government job.

These licenses also offer new opportunities for income for the 500,000 Cubans whose jobs have been eliminated since 2010. State jobs pay approximately $25 a month, which is hard to live on even when education and healthcare are free. That’s why many are eager for additional income as a street vendor, musician, dancer, restaurant owner, art gallery director. Although they must pay heavy taxes on this additional income, most seemed delighted to have this opportunity.

While in Trinidad, a santero talked with us about his religious practices, which he emphasized were not voodoo, but a mixture of native religion with Catholicism. He found his calling when he had a mystical experience while a student in Paris. Although he told us that as many as 80 percent of Cubans practice Santeria, that figure is likely much lower since about 65 percent of Cubans say they are Catholic.

A performance by the Palenque del Congo was a delight. But perhaps most enlightening was the visit to a local ration store. The decades-long embargo by the U.S. had a major impact on food supplies for the people of Cuba, exacerbated by the inefficiencies of their governmental system that eliminated incentives.

Powdered milk is available for children up to the age of seven, with virtually no fresh milk available in the cities. Each family has a ration book, which entitles them to two bolillos (small bread rolls) per day per person, a small portion of chicken or fish per month, a certain amount of rice, eggs, etc., and not all items are available at every store.
The store we visited would never have meat or fish. The ration store we visited had a list of what was available that day, down to matches.

Visiting Cuba was an adventure but you always have to be prepared for the unexpected.
Our visit to a music school was cancelled; our flight from Santiago de Cuba to Havana was moved to an airport two hours away by bus; our flight from Havana to Miami was cancelled, forcing us to take a different flight several hours later.

But you learn to go with the flow. Believe me, it’s worth it.

During our week in Cuba we sampled the rich culture and heritage of the many people who make this island nation what it is: a unique country that is changing rapidly and will continue to do so regardless of renewed restrictions on commerce and tightening of regulations on visitors. Visit Cuba sooner, rather than later, to experience a distinctive vibrant culture – and its beautiful, warm, and welcoming people — that will enrich your life.