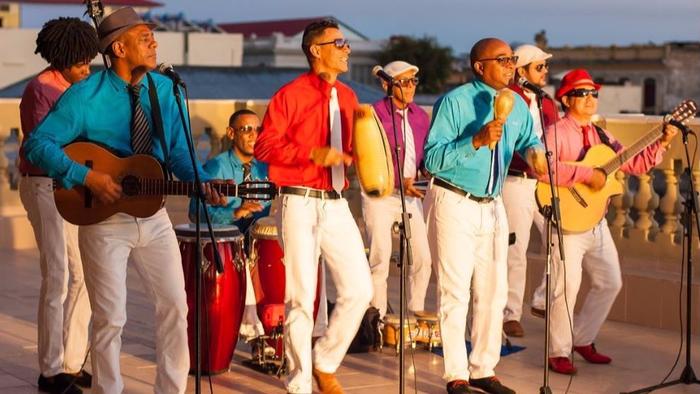 Cuban son ensemble El Septeto Santiaguero can testify to the impact that recognition from the U.S. record industry can have on even a well-established non-U.S. act.

While having formed in 1995, and since releasing eight albums and finding fame in its native country, not to mention tours of Canada, Latin America and Europe, it took the group’s Latin Grammy Award in 2015 before the band was able to land its first gig in the States.

”We’ve received a lot of good reaction in other places, we’ve met a lot of good people and have been watching people at our shows dancing and being happy,” El Septeto Santiaguero founder Fernando Dewar said in an interview recently, for which the group’s producer and manager, Alden Gonzalez Diaz, served as translator.

“But we consider that the U.S. is the big market, the main market that we want to reach,” said Dewar, who is currently on a 20-city tour that arrives in Los Angeles on Friday for a free concert that’s part of the summer Grand Performances series downtown. 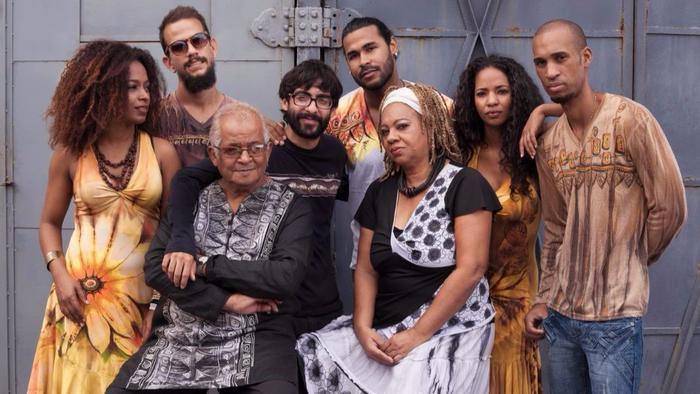 “The U.S. is very important for us, and we were trying for a long time for what we have now: the facility to play in the U.S.,” Diaz said.

That goal appears to be shared by many Cuban musicians who in recent years have found it a bit easier to land gigs in America.

One significant factor has been the easing of the longstanding U.S. political and cultural embargo of Cuba, which dates to the 1959 revolution that culminated in Fidel Castro’s takeover as president and his transformation of the country into a communist regime.

“Cuban musicians see the U.S. as a natural artistic environment, mainly for the musical connections that date back to the ’50s,” said Carlos Alfonso, director of the long-running Afro-Cuban jazz ensemble Sintesis, which will perform Aug. 25 at the Ford Amphitheatre on a bill with Cuban transplant-violinist Dayren Santamaria and her L.A.-based band, Made in Cuba.

El Septeto Santiaguero hails from Santiago de Cuba on the far eastern end of the island nation, more than 500 miles from Havana. The group scored its Latin Grammy in the traditional tropical Latin album category for its 2015 work “Tributo a Los Compadres: No Quiero Llanto.” The album is a tribute to Los Compadres, a duo that is one of Septeto Santiaguero’s predecessors in the trova tradition — loosely, the Cuban strain of troubadour music.

Still, the group might not have made it here if former President Barack Obama’s administration hadn’t moved to improve relations with the nation that sits 90 miles off the coast of Florida.

After that shift began, the band was invited to perform last year at Lincoln Center’s Midsummer Night Swing Festival in New York — its first show in the U.S. El Septeto Santiaguero also landed a coveted spot at the 2017 New Orleans Jazz & Heritage Festival as part of this year’s spotlight on Cuban music.

“We agree absolutely with the more open relationship between Cuba and the U.S.,” Dewar said. “It’s very important that more average American people be able to travel to Cuba. We are very positive about all the things President Obama did, and we hope the way is smooth for a more open relationship to continue.”

Sintesis’ Alfonso sees that two-way street helping on both sides of the political fence.

“Now the American tourists can see, or even better, touch the Cuban reality themselves,” he said. “The people who come here might have some opinions about Cuba influenced by mass media, but here they can really appreciate how the Cuban people are, how we live our lives.”

Sintesis, which formed in 1974, has made a number of visits to the U.S. beginning in 1997 with its first trip north for performances in Whittier and Santa Monica, and even recorded an album, “Orishas,” in Calabasas. Sintesis has been back sporadically — in 1999, 2001, 2012 and most recently in 2014.

The loosening of restrictions in recent years has directly affected Septeto Santiaguero by making collaborations with U.S. musicians more practical. New Orleans jazz trumpeter Nicholas Payton is one of many guest artists on the group’s new album “Raiz,” from which the band is drawing on its current 3 1/2- week, 20-date U.S. tour.

The group’s new album highlights the variety of styles and sounds the band is capable of, including Afro-Cuban jazz and traditional Cuban son and salsa. There are also shades of hip-hop, dancehall and tropical music of the Caribbean.

“We are trying to make the traditional music interesting for new generations,” said Gonzalez Diaz. “Now in Cuba, most of the music the younger generations listen to is totally different from the music we are doing. We don’t want to lose the traditions, and one of the ways to win this battle is to make our music more relevant to young generations, and by attracting young people to our concerts in Cuba. We think we are doing it.”

In Santiago, which was the original capital of Cuba before it shifted to Havana in the late 16th century, Septeto Santiaguero plays venues both humble and stately. It regularly performs on Tuesday nights at the Casa de La Trova, where residents of Santiago gather to dance, drink and socialize, as well as at the Teatro Nacional in Revolution Square, where the ensemble last fall played for an audience of government bigwigs.

President Trump’s shift in policy has imposed limits in travel to Cuba, and there is a concern among artists that visiting the U.S. could once again become more difficult.

“If everything that has been done changes, this of course will mean a huge step backwards,” Alfonso said. “The Cubans as well as the Americans would be equally damaged, because you’d lose the flow of people and the cultural exchanges that make more natural the interactions between our two countries.”

As is often the case among artists, Alfonso hopes that the cultural exchange will be able to continue.

“Each time you capture foreign sounds or elements and mix them with your musical culture without losing your roots, your essence, it’s a fantastic thing,” Alfonso said. “This amplifies your music, takes it to another level, a more universal level.”