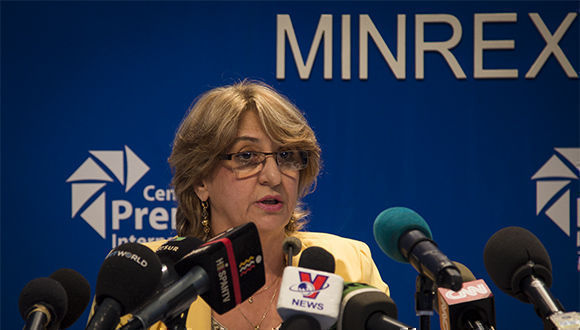 Havana, Mar 13 (Radio Cadena Agramonte) – The President of the National Electoral Commission, Alina Balseiro Gutierrez informed on Monday in Havana that the 605 deputies to the Cuban Parliament and one thousand 265 provincial delegates to the People’s Power were elected during Sunday’s general elections.

During a press conference in Havana, Balseiro pointed out that in compliance with the Electoral Law, each one of the candidates were elected with more than half of the valid votes issued during the second stage of the country’s general elections.

According to preliminary results offered by the Electoral Commission, 7 million 399 thousand 891 voters went to the polls, representing 82.90 percent of the 8 million 926 thousand 575 eligible voters.

According to Balseiro this was an important exercise for the population with a massive participation which reaffirmed the principles of the Cuban electoral system and the revolutionary achievements.

During the second stage of the elections, the population was able to vote for all, several or one candidate. The outcome was 80.44 percent of the population voted for all, which was a united vote, while 19.57 were selective.

She highlighted the good quality of the elections with an outcome of 94.42 percent valid ballots, 1.26 percent were annulled and only 4.32 percent were blank.

The President of the Electoral Commission recalled that over 200 thousand people participated as electoral authorizes with the existence of supervisors, collaborators and permanent support of the institutions and the Entities of the Central State Administration.

Out of the 605 deputies that will make up the 9th Legislature of the National Assembly of the People’s Power, 53.22 percent are women, ratifying the Cuban Parliament as the second in the world with the largest amount of women followed by Ruanda.

The Secretary of the National Electoral Commission, Maria Esther Bacallao said the 13.22 percent of the deputies are less than 35 years of age, while 47.44 come from the grass roots, (delegates to the districts).

For the first time in history the country’s elections were held without the physical presence of the leader of the Revolution, Fidel Castro, ratifying the Cuban people’s commitment with the future of the country currently undergoing social-economic changes aimed at developing a prosperous and sustainable socialist model.