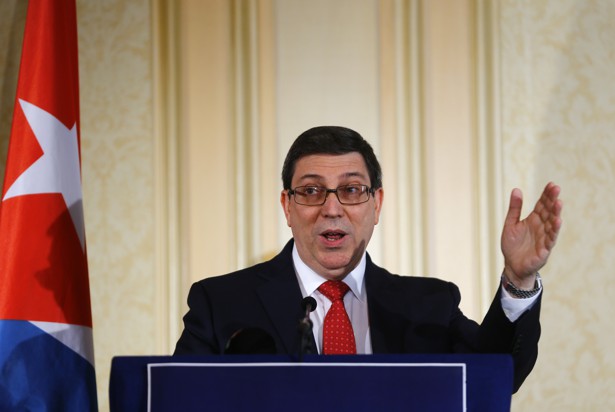 At a Monday news conference, the nation’s foreign minister called the latest deal “a grotesque spectacle straight from the Cold War.”

Speaking at a news conference in Vienna, Austria, on Monday, Cuba’s foreign minister, Bruno Rodriguez, said his nation was not interested in negotiating with the Trump administration over a newly-proposed policy to limit tourism and trade to the island. Cuba “will never negotiate under pressure or under threat,” Rodriquez said, while also refusing to return U.S. fugitives to whom Cuba has granted asylum. “Cuba conceded political asylum or refuge to U.S. fighters for civil rights,” Rodriguez said. “These persons will not be returned to the United States.”

At a Friday speech in Miami’s Little Havana district, President Trump announced he was “canceling the last administration’s completely one-sided deal with Cuba” in an effort to undermine the nation’s current regime, led by President Raúl Castro. “With God’s help,” Trump said, “a free Cuba is what we will soon achieve.” While many of the specifics have yet to be worked out, the new policy intends to reinstate travel restrictions that were loosened under the Obama administration. The policy also aims to prevent U.S. companies from doing business with Cuba’s Armed Forces Business Enterprises Group (GAESA)— a conglomerate tied to many sectors of Cuba’s economy, including tourism.

On Friday, Trump said the deal could be subject to negotiation—with the exception of a few key demands. “To the Cuban government, I say, put an end to the abuse of dissidents, release the political prisoners, stop jailing innocent people, open yourselves to political and economic freedoms, [and] return the fugitives from American justice,” Trump said. “When Cuba is ready to take concrete steps to these ends, we will be ready, willing, and able to come to the table to negotiate that much better deal for Cubans, for Americans.”

Trump also used his speech to call for the return of “the cop–killer Joanne Chesimard,” otherwise known as Assata Shakur. Chesimard, a black nationalist, was granted asylum in Cuba in 1984 after receiving a life sentence for the death of a New Jersey state trooper. On Monday, Rodriquez directly responded to Trump’s order, arguing that the U.S. had no “legal or moral basis” to demand Chesimard’s return or that of any other U.S. fugitive.

While Cuba has previously expressed a willingness to negotiate bilateral issues with the Trump administration, their tone changed dramatically with the unveiling of the new policy on Friday. The Castro government has since released a statement saying that the U.S. is “not in the condition to lecture us” on human rights abuses, citing the GOP health care plan and police brutality as examples of the U.S.’s own violations. Rodriquez reinforced this message on Monday, stating that “Cuba will make no concessions on its sovereignty and its independence, will not negotiate over its principles, and will never accept [imposed] conditions.”

While Rodriquez admitted that Trump’s new policy “will wreak economic damage” on Cuban companies and private sector workers, he argued that it would only serve to further unite his government. Rodriquez also noted that U.S. companies and citizens would suffer from limited economic and cultural exchange with Cuba. Indeed, this very thinking motivated the Obama administration to open the lines of trade and communication with Cuba in 2014, following a 50-year-old embargo that did little to improve conditions in the nation. As a result, the administration paved the way for major companies like Airbnb and Starwood to access the Cuban market, while spurring entrepreneurship among Cuban citizens.

Trump’s new policy threatens to stymie this growth while placing high-level U.S.-Cuba negotiations on the chopping block. With Rodriquez now calling Trump’s policy “a grotesque spectacle straight from the Cold War,” it seems the lines of dialogue between top U.S. and Cuban officials have already begun to close—and, with them, the chance to witness the long-term results of improved diplomatic relations.