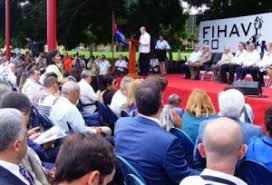 HAVANA._ The Cuban Foreign Investment Law (118) has had a baptism of fire with the presentation of a wide assortment of businesses within the country, specifically designed to stimulate the foreign capital investments necessary for the nation´s economic development.The offers arise in different sectors of the economy and have projects which reflect Cuba´s plans and potential and consequently the ways in which the financial and taxation objectives of the new legislation, which came into effect last June, can be realized.

Inward investment is permissible in all sectors, with the exception of health, education and the non enterprise core of the armed forces, as outlined by the text of the legislation.

The Council of Ministers will sanction opportunities on the basis of the presentation of offers in the national interest and the character of each sector.

Effective since last June, the law is the result of one of the most far reaching strategies contained within the overall process of advancing the Cuban economic model.

The List of Businesses, whose portfolios have been formulated by local enterprises in accordance with their interest in establishing associations with foreign entities, includes 246 projects and an accumulated investment target of USD 8.7 billion.

In addition to new offers, the package includes initiatives presently under negotiation, 25 of which are within the Mariel Special Development Zone located 45km west of Havana.

These prioritize logistics, iron and steel, chemical industries, electronics, biotechnology and the production of agri-foods and medicine, among others.

The political will exists to ensure that both the first investors are quickly installed in the enclave and –on the basis of adequate planning for growth– to create primary conditions utilizing domestic resources. On presenting the List of Businesses at the 23rd Havana International Trade Fair (FIHAV for its Spanish initials), the Cuban Minister for Foreign Trade and Investment, Rodrigo Malmierca, confirmed that it represented a first issue which would be periodically updated to create a more informative second issue, to be drawn up with a deliberate focus on the establishment of production chains.

The contribution that foreign capital could make to the creation of production chains, technology standards, the replacement of imports and diversification of the energy matrix are priorities for Cuba.

This explains the attention and time presently dedicated to inward investment, considered as complimentary to the nation’s progress towards accumulation rates in excess of 20 percent which will make a sustainable rise of five percent in gross domestic product possible.

Full legal protection, the possibility to extend business authorization terms, political and social stability, geographic location within an expanding market and high levels of education are among the factors that make Cuba an attractive option for foreign investors.

The presence of more than 2,000 representatives of the business communities of 60 countries at FIHAV reinforced not only Cuba´s growing willingness to engage with the global economy but also the interest in participating in its ambitious projects.

It is now up to Cuban authorities and bodies, within the shortest possible time frame and the provision of mutually advantageous guarantees to establish and sustain the first projects to inspire increasingly dynamic service provision and production.