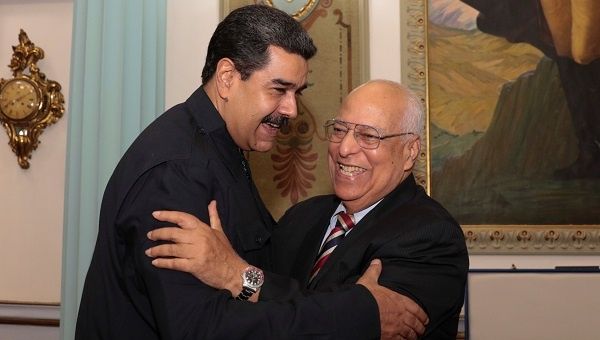 Nov 17 (Telesur) Venezuelan President Nicolás Maduro has met with Cuban diplomats at the Miraflores Palace in Caracas to strengthen bilateral relations between the two countries.

“I receive this visit of the Cuban authorities to strengthen the bonds of cooperation with our brethren,” Maduro tweeted after the Friday meeting.

Last month marked 17 years since the signing of the Cuba-Venezuela Cooperation Agreement by presidents Hugo Chávez and Fidel Castro in 2000.

The agreement covered joint programs regarding the social, economic and cultural development of both countries.

Cuba also offered to train Venezuelans in health and sports, as well as areas such as educational methodologies, sugar production and tourism development.

To date, the agreement has been credited with the creation of the Barrio Adentro Mission, which installed clinics staffed by Cuban doctors across Venezuela.

It has also resulted in the establishment of 568 Integral Diagnostic Centers, 585 Integral Rehabilitation Rooms and 35 High Technology Centers, which is believed to have saved more than 1,750,000 lives.