No matter being the third largest Hispanic group in the United States, the Cuban community is the minority with more representation in Congress, but…

Are the interests of this community really represented? 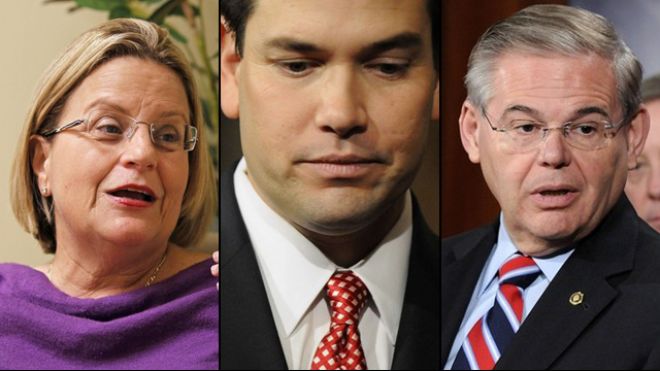 Ileana, Rubio and Menéndez the anticuban force squad in Congress

Most Cubans living in the U.S., or at least those who have migrated in the last 25 years, want to retain links with their country of origin, whether visiting relatives or sending remittances , investing in small businesses, helping persons or institutions , or promoting barriers to be torn down, but not interested in promoting economic sanctions against their relatives and people.

Most will not accept to solve political differences by causing misery, hunger and despair.

However, access and participation in the formulation and implementation of Washington policy towards Cuba remain kidnapped by the most extremist sectors, which have managed to keep an extremely negative formula of denying, punishing, splitting.
Are Cuban-Americans representatives corrupt?

The achievements and the image of the Cuban- American community in the United States have been lately affected by  ongoing corruption scandals faced by their more notorious Senators and Representatives.

The last 3 mentioned were, at the moment, considered among the most corrupt congressmen in Capitol, by Washington´s Center for Ethical Responsibility and in the case of Mel and Lincoln, silently forced to quit their jobs as member of the legislative branch.

Ileana Ros-Lehtinen (R-Fla) and Joe García (D-Fla), two other Cuban-American members of the House of Representatives have not escaped clean either.

The first one was clearly linked to the judicial case against multimillionaire Robert Allen Stanford, now serving a 110 years sentence.

Even Joe, also face the probe in 2012 involving some of his closest collaborators during the 2012 electoral campaign.

With midterm elections knocking the doors again, some questions come to my mind:

Are these representatives what Cuban community needs?

Can President Obama break away from the pressures of this group of congressmen and promote a  constructive agenda, to improve bilateral relations?