World Solidarity With Venezuela: ‘No’ to Imperial Attacks 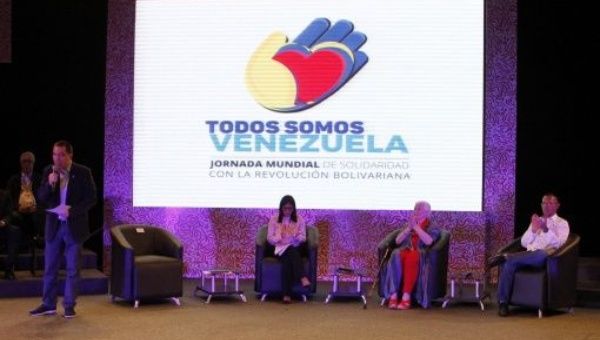 The declaration of Caracas issued by the social movements of the world has rejected the aggressions and sanctions imposed by the United States and the EU against Venezuela.

March 7 (teleSUR) Social movements and international guests at the Solidarity Day “We Are All Venezuela” rejected the aggressions imposed by the United States Government against the South American nation, which they denounced as an attack on the economy and the people.

From the Venezuelan capital Caracas, social movements from around the world issued their statement in which they repudiated “the escalation of aggression against democracy and the sovereignty of Venezuela on the part of U.S. President Donald Trump.”

The statement read by the representative of the Network of Intellectuals Chapter Mexico, Ana Esther Ceceña, denounced that the United States seeks to overthrow the legitimate Government of Nicolás Maduro and appropriate the resources of Venezuela.

She also warned that the measures against Venezuela has also been implemented in other countries of Latin America and the Caribbean.

“We repudiate the threats of military intervention by Donald Trump towards Venezuela, which would cause incalculable human, economic and ecological effects,” the document cites.

They also warned of U.S. intentions which seek to destroy regional integration, while criticizing those countries that increase inequality and violate human rights which then criticize Venezuela.

The social leaders rejected the sanctions imposed by the U.S. administration and the European Union (EU), which in their view aim to destroy the economy and hit the Venezuelan people.