With Diplomatic Doors Opening, Dartmouth Students May Head To Cuba 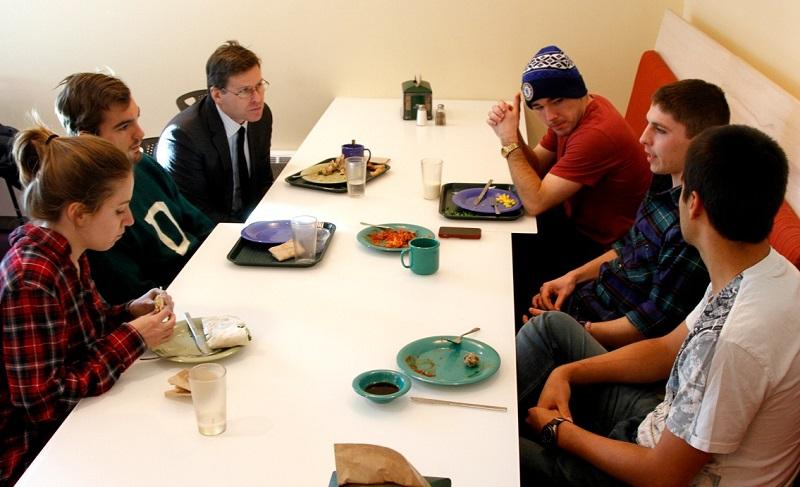 Professor Charles Wheelan (upper left) discusses the diplomatic thaw with Cuba at lunch with students in a Dartmouth Dining Hall. The College is planning to establish an exchange program with Cuba next fall.

When President Obama announced plans to normalize diplomatic relations with Cuba last month, Dartmouth College officials were surprised, and happy. That’s because the college is part of a consortium of seven schools already building an academic bridge to the communist nation. College officials believe the new foreign policy will ease travel restrictions for students and faculty.

Meanwhile, the Hanover campus is abuzz with Cuba talk. At lunch in a Dartmouth dining hall, five students chatted with a professor about the limits of the diplomatic thaw. Joe Carey, a senior, explained the Helms-Burton Act, the federal law that strengthened the U.S. embargo and remains an obstacle to American investment.

But Carey says President Obama is moving in the right direction.

“There’s still a long way to go but it’s a good gesture for sure,” he said.

At the other end of the table, economics professor Charles Wheelan said he once met Fidel Castro on a reporting trip for The Economist. He was covering a trade mission by government officials from Illinois. A Dartmouth alum, Wheelan says his alma mater has been a pioneer in educational exchanges, sending students to the Soviet Union before the Berlin Wall fell, and to China before the Tiananmen Square protests.

“And so I think it’s really great for students; it’s great for the institution to be there when societies are changing at such a rapid pace,” Wheelan said.

In a student center next door, Chase Mertz said he’s sorry he won’t be able to study in Cuba, because he graduates this spring.

But if the trade embargo is lifted, he hopes he may be able to work there for an American company.

“I mean, Cuba is an interesting place pretty close by with a lot of culture that I think that maybe we’ve been missing out on for the past few years so maybe it would be nice to go there and experience some of that,” Mertz said.

The exchange will be only one-way, at first, as Americans study at one of two elite Cuban institutions of higher learning: University of Havana and Casa de las Americas. Government Professor Lisa Baldez, who directs Dartmouth’s Center for the Advancement of Learning, says some students may be surprised at how sophisticated Cuban society is.

“And I think for students that will be a revelation, to understand that we may not know much about Cuba but Cubans know a lot about us and that has been literally true for hundreds of years,” said Baldez.

For example, she says, on her recent visit to Havana, her cab driver was an expert on the U.S Congress and many Cubans were hooked on PBS shows like Downton Abbey.

Lynn Higgins, associate Dean for International and Interdisciplinary Studies, says students must be bi-lingual to be accepted into the exchange program. Diverse academic courses will be taught in Spanish.

Higgins expects exchange courses will get the faculty committee approval they need to start up in Cuba next fall.