Why the US-Cuba thaw should continue 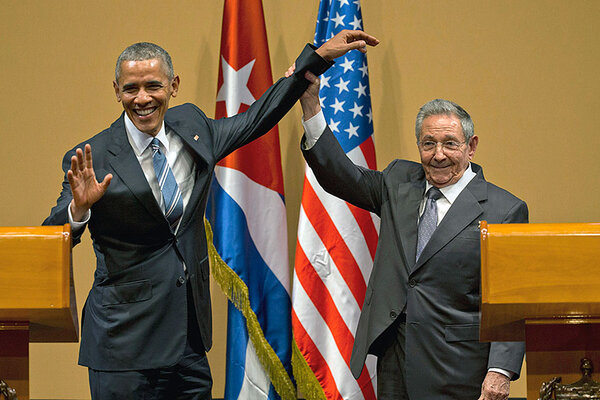 In the two years since a restoration of diplomatic ties was first announced, great strides have been made in normalizing relations. That trajectory benefits – and is supported by – a wide array of people.

On Dec. 17, the United States and Cuba will mark the two-year anniversary of the historic announcement that the two countries would restore diplomatic relations. Support for this new era in US-Cuba relations is strong among the people in both Cuba and the United States and has bipartisan backing in Congress. In the two years since the announcement, economic and political ties between the two countries have continued to grow.

Dec. 17 will also mark the first anniversary of the founding of a bipartisan group of lawmakers in the House of Representatives known as the Cuba Working Group, which is leading efforts to promote further engagement. The Working Group has been extraordinarily busy this year. With many of the Republicans as lead sponsors, its members have introduced key legislation to allow US businesses in the private sector to trade with Cuba without restrictions, expand telecommunications services, and allow all US citizens to travel to Cuba freely.

The Cuba Working Group has also underscored the benefits of normalizing relations with Cuba, both for the United States and the Cuban people. On Dec. 7, members Rep. Tom Emmer (R-Minn.) and Rep. Kathy Castor (D-Fla.) hosted an event with over 100 Cuban private business owners who support increased engagement with the United States. In a letter to the incoming Trump administration, these entrepreneurs noted that: “[a]dditional measures to increase travel, trade and investment … will benefit our companies, the Cuban people and U.S. national interests.”

Increasing engagement also has the support of a broad cross-section of the business community in the United States. Over the last two years, US companies – including Netflix, Marriott, General Electric, and Verizon – have signed agreements to do business with Cuba. Today, Cuba is the fastest-growing market for the homestay service Airbnb. Two US banks now offer credit cards for use in Cuba. The first commercial Miami to Havana flight by American Airlines landed on Nov. 28 of this year and eight airlines have signed deals to operate as many as 20 daily flights from the United States to Cuba.

Telecommunications is expanding and companies such as Sprint, Verizon, AT&T, and T-Mobile are offering roaming on the island. In addition, earlier this week Google signed an agreement with the Cuban government that will speed up internet services on the island and give users quicker access to sites like YouTube and other Google content. While the vast majority of Cubans don’t have access to the Internet, the new deal is a step towards expanding the service to more Cubans in the future.

Currently, the United States and Cuba are in the process of negotiating at least half a dozen agreements that will further benefit business and other sectors. Many of these agreements are expected to be finalized in the next few weeks.

Support in the business community is matched by overall public opinion in the United States. According to a CBS News poll from last year, 81 percent of Americans support ending travel restrictions, including 71 percent of Republicans. Among Cuban-Americans, 75 percent support the lifting of the ban on travel, including 94 percent of recent arrivals. A New York Times/CBS poll from March of this year found that a majority of Americans, nearly 60 percent, support the reestablishment of diplomatic ties, and 55 percent support ending the embargo.

Cuban-Americans are increasingly taking advantage of the opening to Cuba. With the lifting of travel restrictions, Cuban-Americans now make more than 400,000 trips a year to the island, mostly to visit relatives and support the family economy.

Engagement benefits the people of both countries. Cuba is undergoing a slow but real process of economic reform and has seen moves toward political opening (see WOLA’s factsheet on reforms in Cuba). The growing ties between the Cuban and American people are central to this process.

The most serious obstacle to further engagement on the US side remains the 50-year old US trade embargo, which requires an act of Congress to remove. Popular support, ties of travel and business, as well as bipartisan efforts in Congress indicate that the historic changes set in motion two years ago continue to have strong momentum.

A version of this post ran on the Washington Office on Latin America site. The views expressed are the authors’ own.