Why Such Hate Against Ecuador’s Rafael Correa? 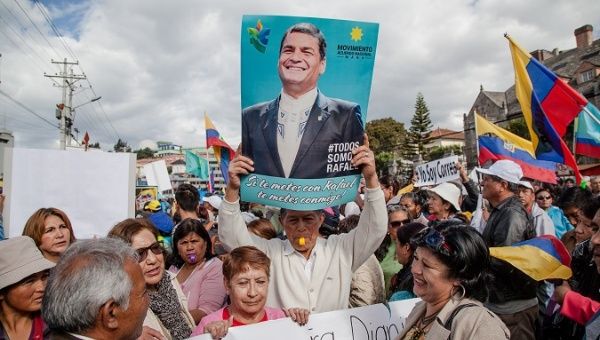 They are trying to legally nullify Rafael Correa, an Ecuadorean colossus, who stood up against the empire because the horsemen of death know their Junius Brutus (Lenin Moreno) has his days numbered.

July 7 (teleSUR) A court in Ecuador just issued an international arrest order on one of the main human rights defenders of the Latin American and Ecuadorean people, ex-President Rafael Correa.

The former leader is being accused of illegal association and kidnapping in relation to the Fernando Balda case, an Ecuadorean ex-lawmaker who was allegedly held against his will in Colombia, in 2012. The accusations are based on the testimony of a former police officer (an effective collaborator) currently under investigation, who said: “I sent letters to President Correa.”

While this is happening, the most corrupt former neoliberal rulers, who handed over the resources of the Latin American people to foreign companies, are enjoying their permanent vacations in the U.S. For example, Bolivia’s Gonzalo Sanchez, Peru’s Alejandro Toledo… fraudulent president and/or corrupt such as the current ones in Guatemala or Honduras. As long as they have the blessing of the U.S., they’re untouchable. Brazil’s Temer, Argentina’s Macri, even with lawsuits against them, they’re still ruling in favor of the interests of the empire.

The bad taste play called “anti-corruption war,” promoted by the North American government and celebrated by the Latin American naivete, is no more than the continuation of the fake “anti-communist war.”

In the 1970s, defenders were tortured and physically annihilated. Now, through public and legal lynching, they destroy the honor and moral integrity of defenders. The objective is always the same: to subdue the defenders and turn them into monsters.

They are trying to legally nullify Rafael Correa, who as an Ecuadorean colossus stood up against the empire from the Carondelet Palace for a decade, because the horsemen of death know their Junius Brutus (Lenin Moreno) has his days numbered, not because of his physical impairment but due to his actual moral condition of traitor. The Roman Brutus, the traitor/murderer of his father Julius Caesar, killed himself after being defeated by guilt.

What unforgivable thing did Rafael Correa do?

According to reports from the World Bank, in 2000 more than 64 percent of Ecuadoreans were living in poverty conditions. Correa, in his decade of government (2007-2017) reduced poverty in Ecuador by 21 percent. That’s to say, more than 6 million Ecuadoreans stopped being poor during that period.

Rafael Correa completely restructured the country’s taxation system. The collected money was distributed to impoverished families through social policies. It was a great example of economic democratization in times of world recession.

The former president turned Ecuador into a world referent, not only in taxation justice and social equity, but also in the construction of an enviable modern road network never before seen in the country. Correa expanded the access to public services as fundamental human rights as never before in the country. The dealers of public services will never forgive him these or other audacities.

Regarding the migration issue, in 2007 Ecuador was what Guatemala, Honduras and El Salvador are now: outward migrating stampedes. With Correa, the Ecuadorean migrants returned to their country with organized return policies. Not only this, with the new Political Constitution of 2008 the Latin American citizenship was established in this ecologically megadiverse country.

Rafael Correa, along with a Pleiades of Latin American liberators of the 21st century, imposed the dignity and regional sovereignty of Latin America with the creation of Celac, ALBA, Unasur and other organizations. All that, without Washington’s approval. He took Ecuador away from the economical fetters of the TBI [temporary business interruption] and the World Bank.

As a Latin American David, Correa expelled the North American usurper army from the Ecuadorean territory (Manta). He humiliated, without actually looking for it, the arrogant North American geopolitics in the cases of Assange, Usaid, etc.

Correa, in 2007, found an Ecuador in an accelerated process of sociopolitical decay. But in 2017 he managed to place the Andean, Amazonian country in the world’s display cabinet as a model to look at.

At the end, our rights defender Rafael Correa was and is a living, contagious wall that stopped and will keep stopping the North American commercial and political expansionism in Latin America.

The North American imperial oligarchy and its regional accomplices, used to see their tattered vassals in the Latin American people, will never accept nor allow that Latin American liberators to end up in history as heroes or seedbeds of liberty, dignity and sovereignty. That’s why they’re lynching Lugo, Cristina, Lula, Dilma, Rafael, Maduro… But, millions of Latin Americans have awakened and we’re going towards our pending emancipatory dreams.