Why did Díaz-Canel make his first state visit as President to Venezuela? 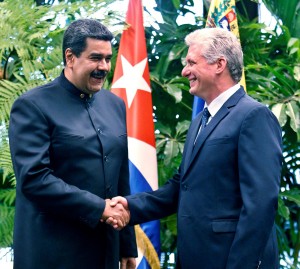 June 1 (Cubadebate) Nicolás Maduro was the first head of state to visit Cuba last April 21, after the election of a new President of the Councils of State and Ministers, Miguel Díaz-Canel Bermúdez, in an expression of the continuation of the Cuban Revolution.

At that time the Venezuelan leader said that he had come to Cuba to renew hopes, dreams, and look to the future, toward greater economic integration and the strengthening of continental unity.

The Cuban President recently visited the land of Bolívar taking with him an embrace from Army General Raúl Castro Ruz and the Cuban people to the heroic people of Venezuela.

– Through the Barrio Adentro mission –Into the Neighborhood – created in 2003 and designed to provided free medical care to Venezuela’s most vulnerable and marginalized communities, State-of-the-Art Technology Centers (CAT), Comprehensive Diagnostic Facilities (CDI), and Integral Rehabilitation wards were set up; medical institutions and technologies across the country’s entire network of hospitals and clinics were modernized, while today 95% of doctors’ offices in Venezuela are staffed by community doctors and Comprehensive Family Medicine specialists trained under the Bolivarian Revolution by Cuban healthcare professionals.

– The Barrio Adentro sports initiative has seen Cuban professionals bring joy and health to communities in the remotest regions of Venezuela, for the last 13 years.

– Venezuela became an illiteracy-free country in record time after 1,500,000 citizens learned to read and write through the government’s Mission Robinson, founded on July 1, 2003 and using the Cuban developed Yo Sí Puedo (Yes, I can) literacy method.

– Cooperation in the field of agriculture gave way to an agreement to strengthen seed production and urban farming, in order to diversify crop production. Meanwhile Cuba has also provided Venezuela with all its knowledge on economic recovery, as well as the restructuring, updating, and development of the sugar industry and its derivatives.

– To help alleviate the impact of the economic blockade imposed on Cuba for over 55 years, Venezuela and Cuba established an agreement supplying oil to Cuba a preferential prices.

– The commitment of both countries to the most sacred principles of the Cuban Revolution, is encompassed in the idea expressed by José Martí that homeland is humanity and in the work of love undertaken by Fidel and Raúl.