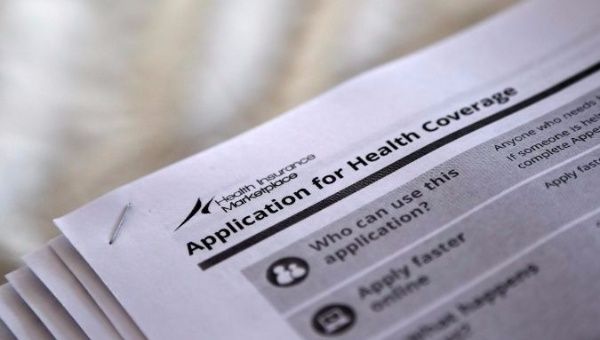 The federal government forms for applying for health coverage are seen at a rally held by supporters of the Affordable Care Act on October 4, 2013. | Photo: Reuters

So frequently is the word ‘freedom’ employed in the political vernacular, it has come to mean whatever the listener desires.  For Mr. Trump, it is one word in the volcanic plume countering a society’s rhythm, designed to attract attention. That he has garnered in spades, enough to win him the highest office in the land.

To many, freedom is an absence of worry. The desire and need for a social fabric knit well to support the basic prerequisites: food, shelter, health and education. None of them charity, because they are an investment in the fundamental source of a society’s well-being: human capital.

The selfishness of the haves has contributed to a loss of competitiveness. The old GM was paying US$100-$200 per car in health insurance costs, and manufacturers were also forced to provide remedial education for high school graduates to enter the world of complex modern manufacturing. Neither was a similar burden on competitors from Japan and Germany. Suffice to say though that this was not the only reason for problems.

But selfishness is not all with regard to healthcare, the focus of this piece. The biggest culprit by far is general complacency. Added to a Republican majority in Congress and Donald Trump, there is little hope in the near future.

Reading about healthcare recently, I came across an article in a prestigious magazine offering a solution. Affiliated to Stanford, the authors were an MD/MBA candidate and a venture capitalist adjunct. It says it all. Why would a doctor want an MBA? It is not an uncommon program, by the way. The answer is simple and obvious: the medical profession is big business. Did the authors have a prescription? Indeed they did. Force everyone to have insurance and force insurers to insist on primary care.

As a percent of GDP, the United States spends more on healthcare than any other industrialized nation. Yet it lags far behind in measures like child and maternal mortality, life expectancy and chronic illness.

A survey last November by the New York based Commonwealth Fund compared the United States with 10 other advanced countries. The Netherlands came out on top; the United States dead last. By coincidence, the Dutch are the tallest people on earth. “U.S. adults are sicker and have the highest rates of material hardship,” observed Robin Osborn who led the survey.

Of note, despite dilapidated facilities in Cuba, universal healthcare has paid off. Life expectancy is higher than the U.S. by about a year.

The slogan ‘Medicare for all’ is catchy, and, were it to happen, would transform healthcare. All the same, Medicare has gaps throwing people back into the arms of insurers, and into the morass of bills from hospitals, accounting by insurers as to what is covered, and arguments back and forth; not to mention overcharges by hospitals, which have their own litany of unbelievable tales.

In the British system – under attack by the Conservatives for some time and being gradually dismantled – no one ever sees a bill. It allowed post Second World War generations of poor and disadvantaged to bring up healthy, educated children who contributed to the growth of the country.

If there is an answer to the problems in the U.S. system, it will have to come from independent experts. Profit oriented hospital corporations buying up community hospitals and headed by multi-million salaried CEOs is not the answer.  Neither are for-profit insurers. Who has the guts to pour ‘liquid plumber’ down this clogged-up drain? That is the real question. The Canadian politician who fought for their healthcare system is a national hero. Any takers here?

Dr Arshad M Khan is a former Professor whose comments over several decades have appeared in a wide-ranging array of print and internet media.