Where the International Front Against Venezuela Is Heading 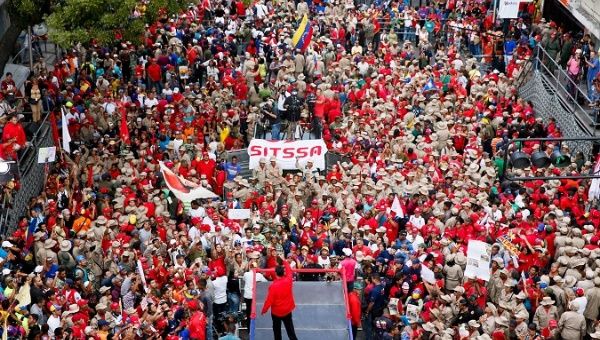 April 18 (teleSUR) The 8th America’s Summit was controversial thanks to the many corruption cases involving Latin America’s political classes. Its international impact was lessened by the absence of Donald Trump and another ten or so heads of State. But it still served as a platform to try and shape a series of aggressive measures in the short term against Venezuela with the aim of disrupting the Presidential elections of May 20th.

From Syria to Venezuela via Mike Pence and Antonio Ledezma

The immediate message of that meeting, just when across the Atlantic the US was preparing its military aggression against Syria, is disturbing because it shows that the Venezuelan opposition openly supports a world power bombing a sovereign country on false evidence and in violation of international law.

This is a sinister precedent since, in Venezuela’s case, not only would these opposition politicians give the same support to a US military attack against their own country but they also argue for it constantly.

During the meeting, Pence promised to ensure US$16 million in “humanitarian aid” for “Venezuelan refugees” in Colombia and Brazil, deliberately omitting that this international legal category does not apply to migrants from Venezuela.

After the meeting, Mike Pence remarked, “We call for more sanctions, more isolation and more diplomatic pressure but also for the rest of the world to recognize that Venezuela is a dictatorship”.

The EFE news agency reported the opposition spokesperson asking that the Presidential elections result of May 20th should not be recognized, for a “humanitarian aid” plan and for tougher financial sanctions.

However, it was Antonio Ledezma, on the run from Venezuela’s justice system, who took this opportunity to extremes so as to set himself apart from the others in the meeting. He demanded from Pence a military intervention in Venezuela, perhaps trying to exploit for his own personal agenda Trump administration’s aggression on every geopolitical front.

The Venezuelan opposition also met with Marco Rubio, someone who has gained an increasingly authoritative voice on US foreign policy towards Venezuela via his position in the Senate.

Intimately linked to the arms and Israeli lobbies in the US Congress, Rubio has had enormous influence promoting sanctions against Venezuela.

While opposition leader Julio Borges was absent from the meeting with Marco Rubio, various opposition legislators travelled for it to the America’s Summit. The absence of Borges suggests the differences he has with Rubio, who supports the far right coalition I Am Venezuela, and his unwillingness to be Rubio’s subordinate.

On the issue of funding under the guise of “humanitarian aid”, the meeting with Rubio, according to the Diario de las Américas, was an extension of the earlier meeting with Mike Pence.

Also on that meeting’s agenda was the issue of US diplomatic support to Venezuela’s National Assembly as a tool of political destabilization, something that coincides with the move by the self-styled “Supreme Court in exile” to open a political trial in violation of Venezuela’s Constitution against President Nicolas Maduro to try and force his removal. But ratification of this sham trial lacks acceptance of the National Assembly, which clarifies Rubio’s role in the move given his support for that currently disqualified institution.

Despite the meeting being hailed as a success, Marco Rubio said no consensus exists as regards Washington’s policy of isolation and asphyxia towards Venezuela. He said, without specifics, that a meeting of the OAS would be convened in May to try and use the authority of the United States in the region to obtain a widespread rejection of the results of the May 20th presidential elections.

For its part, the Lima Group issued a statement demanding “electoral guarantees” from Venezuela’s government for the May 20th Presidential elections, as well as backing the OAS actions to promote a boycott of the elections and foment political and institutional confrontation in Venezuela.

Although Brazil’s foreign Minister Aloysio Nunes met with Venezuelan opposition leaders and signed the Lima Group statement, he confirmed Brazil would not apply sanctions against Venezuela. His dissonant comment complicates the unity of agreement the Lima Group seeks to project.

However, the omissions in the Lima Group’s statement speak for themselves. The sanctions do not appear as a measure to be taken immediately, but neither is there any coercive diplomatic measure, such as the breaking off of relations following the Presidential vote, regardless of its result.

Probably, the Lima Group is trying to moderate the Trump administration’s aggressive tone so as to show at least some degree of independence, knowing full well no regional consensus exists on strangling Venezuela.

One key point, since March this year, Julio Borges has been saying the Lima Group will sanction Venezuela following the Presidential elections, something far from clear in the ad hoc Lima Group’s recent statement.

Another sign of the lack of regional consensus on the US siege agenda against Venezuela has been the number of OAS Permanent Council meetings called over the last two years which have failed to galvanize majority support.

The international front against Venezuela moves in different directions, each piece on the board tries to impose its own agenda while the clock ticks rapidly on towards the Presidential elections.

In that sense, the meetings of Venezuelan opposition leaders at the Americas Summit with high ranking US officials and ambassadors from other countries have not revealed anything new as regards the demands for more pressure on the Venezuelan government.

The governments with most economic and political weight in the region understand that blindly following the made-in-the-USA strategy of total isolation against Venezuela could be counterproductive for their respective countries’ economic interests. Furthermore, it would mean projecting an unhelpful position of stubborn intransigence towards Venezuela when that country is central to the regional political, diplomatic and strategic stance of China, Latin America’s emerging partner with whom no country wants to have bad relations.

Chinese and Russian financial, energy and geopolitical interests in Venezuela are an important deterrent that sets down red lines for outside pressure against Venezuela.

On the other hand, not following the US agenda against Venezuela means being exposed to a series of political and financial retaliatory measures which are likewise undesirable. For that reason, it is likely that the Lima Group means to keep up appearances while also keeping a certain distance from US efforts at boycotting Venezuela with regional support.

This contradiction is precisely what US policy exponents, like Marco Rubio, and in his own way, Mike Pence, want to exploit, along with their vassal subjects on the ground like Antonio Ledezma, the I Am Venezuela coalition, the extinct Popular Will party, factions of the Justice First party and the other residual anti-Chavista remnants.

By fabricating a zero-sum conflict, simulating an epic all or nothing challenge, these US leaders seek to force the region to dance in rhythm with the US government after the May 20th elections. And it is there where realpolitik will finally tell, since it looks as though a mere statement rejecting the Presidential elections will be insufficient without some practical consequence as well.