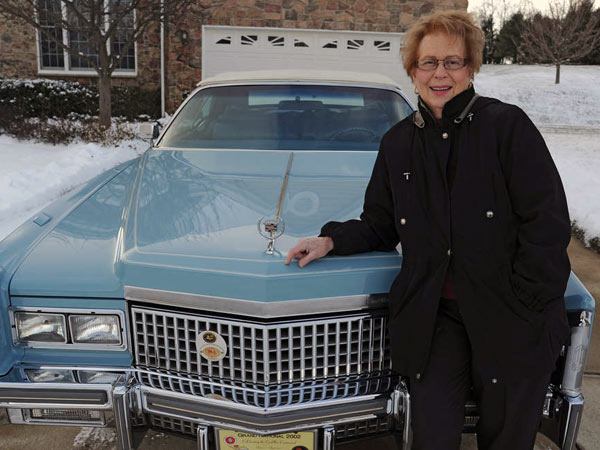 A cultural-exchange idea built around cars may finally yield results.

Fifteen years ago, two Philadelphians with a shared affinity for classic cars, world affairs, and Cuba formed a quirky nonprofit that some now say was prescient.

Their group, TailLight Diplomacy, sprung from the notion that the estimated 50,000, pre-1960, Detroit-built “Yanktanks” – the vintage cars still rolling in Cuba – could unite car enthusiasts from America and the island nation for groundbreaking exchanges.

Founders Rick Shnitzler and John Dowlin corresponded with Cuban officials. They wrote to Congress. Shnitzler, now 71, presented the idea at the U.S. Cuba Sister Cities Association conference in Havana in 2000. Dowlin, 73, a home remodeler who once toured the island nation by bike, promoted TLD with op-eds. American cars of the 1940s and ’50s, he wrote in 2009, are as iconic in Havana as cable cars in San Francisco, gondolas in Venice, and red double-decker buses in London.

“The windshield has been cleaned for better U.S.-Cuban relations,” he wrote in the Harrisburg Patriot-News in 2011. “We’ve checked the oil and water. Perhaps now it’s time to try the ignition.”

Still, Shnitzler said this month, “none of it produced what we had hoped, which was to have ’56 Buick owners from both countries meet face-to-face.”

President Obama’s recent announcement of “historic steps” to normalize relations with Cuba after more than a half-century of acrimony puts fresh gas in Shnitzler’s tank. And it revs the engine on an idea he is pursuing independently – TailLight Diplomacy Global – which would bring a small number of Cuba-seasoned cars and their owners to America for a show-and-tell tour.

As attractions, he quipped, the old roadsters are “better than moon rocks and the Rocky statue. You could put one in the Natural History Museum, next to a dinosaur.” Or maybe, he said, “a Cuban family comes to Michigan, leaves their ’52 Chevy, and goes home with a new Chevy” in trade.

That would take special handling because the vintage Chevy Bel Airs and Impalas, Pontiac Bonnevilles, Nash Metropolitans, and Hudson Hornets, to name a few, are considered part of Cuba’s national heritage and are not permitted to leave the island.

On a grander scale, Shnitzler said, he would expand his proposal to include the 16 other countries that manufacture a million or more cars a year – creating a global showcase for America’s 20th-century manufacturing prowess, and Cuba’s ingenuity, which keeps the relics rolling.

Pie in the sky, perhaps, but Shnitzler, an inveterate dreamer, hopes the proposal, which he intends to circulate in government, media, and antique-car circles, will provoke dialogue.

In an interview, Dowlin, who has no car and travels by bike, said he differs with Shnitzler’s proposal in one key respect. “The cars are gems where they are,” he said, “and should be restored in place.”

As a child in the 1950s, Shnitzler vacationed twice in Cuba, he said, and drove a car for the first time there. In Philadelphia he brokered rare cars, used parts, and obsolete car manuals for 20 years. He met Dowlin in the 1990s.

In its heyday, TLD had seven car buffs, automotive historians, and a car museum association director on its national advisory board.

Sometimes hailed as a cutting-edge attempt to “jump-start” relations with Cuba, TLD also had critics. In 2011, Babalu, an online blog that calls itself “an island on the net without a bearded dictator,” labeled TLD “another scam” to whitewash Castro’s dictatorship.

With Obama calling for normalizing relations with Cuba now, John Heitmann, president of the Society of Automotive Historians, said that Shnitzler should feel proud.

His was “a voice in the wilderness [on] the potential relationship involving automobiles and Cuba,” said Heitmann. “At times . . . I could not take him seriously. Now I think he can be seen as a persistent visionary” who “kept pushing when the idea was just a curiosity.”

Fidel Castro came to power in the 1959 revolution that overthrew dictator Fulgencio Batista. After the failed, CIA-sponsored, Bay of Pigs invasion in 1961, and the Missile Crisis of 1962, the U.S. placed an embargo on virtually all exports to Cuba.

The embargo extended to U.S. tourism, but the Office of Foreign Asset Control has permitted structured visits of an educational nature.

That is how the Antique Automobile Club of America Museum, of Hershey, Dauphin County, was able to plan a nine-day, $5,000-plus People, Culture & Classic Cars tour of Cuba, taking place April 23 to May 1.

It’s the museum’s first trip to Cuba and was announced about two weeks before the Dec. 17 address in which Obama called for a new day on Cuba policy.

About a year ago, she said, some museum members requested a trip to Cuba “to see the cars and meet the car people.”

Reaching out to some Americans with contacts in Cuba’s car scene, including Shnitzler and Floridian Bill Warner, founder of the Amelia Island Concours d’Elegance, a show that features vintage Rolls-Royces and Duesenbergs worth hundreds of thousands of dollars, Rothman put together an itinerary and brought in a U.S. travel company licensed to lead tours to Cuba.

“Brush aside the Cuba that you ‘know’ from history books and current events,” reads the promotional literature, which goes on to promise:

An outing with the Amigos de Fangio car club, named for a famed Cuban race driver. A guided tour of the Deposito del Automovil, where antique cars are displayed. A meeting with Cuban mechanics, among them the virtual magicians who discovered that shampoo blended with oil makes ersatz brake fluid.

“Modern shampoos are loaded with silicone so hair won’t frizz,” said Rothman. “It turns out to work in brake systems, too.”

One measure announced by Obama would allow American exports to Cuba’s small, private-business sector. For mechanics, that raised a hope that U.S. car parts and supplies could start flowing again.

The limitation was lifted in 2013, but came with huge markups for rarely available new cars – for instance, $262,000 for a Peugeot listed for $53,000 outside of Cuba, according to one recent news report.

By contrast, a rattling relic for $20,000 is still a huge stretch for Cubans making about $20 a month.

But at any price, said Shnitzler, conjuring an image he cites frequently, Cuba’s classic cars are a big emotional investment too: