Republicans don’t have a soft spot in their hearts for former governor Charlie Crist of Florida, the Republican-turned-Democrat now running to take his old office back from incumbent Republican Rick Scott. 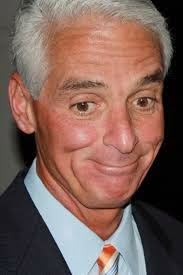 And some Democrats who have long labored in their own vineyard may not yet have warm feelings about him either.

But everyone agrees that he is flexible, and that Charlie will do what is good for Charlie.

So it’s quite a political event that he becomes the first statewide candidate in recent Florida memory to call for ending the embargo against Cuba, and he is now contemplating a trip there in the heat of the campaign (Herald).

My guess is that, like many Republicans, he believes the embargo is a mistake. What matters, and what says a lot about Florida politics today, is that he has calculated that it’s politically expedient to say so out loud.

In that the Cuban American vote split 50-50 between President Obama and Governor Romney, there may not be a big price to pay in Miami-Dade. Beyond that, he’ll take the issue to Tampa and other places around the state where people view the policy as a failure on its own terms that also limits Florida’s economic opportunities.

“From a selfish point of view as a Floridian,” he said last February, he would like the embargo to end “because a lot of construction would be required on the island, and South Florida could be the launching pad for all of that and really create some jobs for the people of my state.”

Good for you, Charlie, and good for Florida, America, and our eleven million neighbors in Cuba.