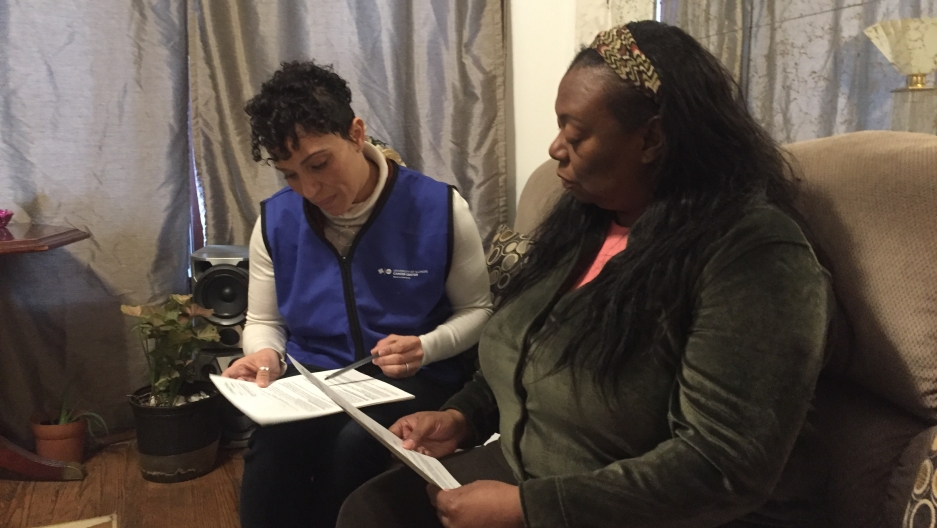 Some neighborhoods on Chicago’s south side, as with other of the most low-income parts of the US, have an alarmingly high infant mortality rate. It’s a persistent and complex problem that doctors are trying to tackle. But resources can be scarce, so they are thinking creatively, which has led them to look to an unlikely role model: Cuba.

The Caribbean country boasts an infant mortality rate of 4.3 per 1,000 — lower than the United States’ 5.7 per 1,000, according to World Health Organization data, and lower than the rate in Chicago’s Englewood neighborhood, on the city’s south side, where 14.5 babies per 1,000 do not reach their first birthday.

In an effort to tackle the high rate, medical professionals in Chicago are now working with their counterparts in Cuba to learn about new approaches, including seeking out women of childbearing age in the Englewood neighborhood to ask them about everything.

“In the last 12 months, have you had any problems with any bug infestations, rodents or mold?” the Chicago-based epidemiologist Kathy Tossas-Milligan asked Yolanda Flowers during a recent visit to her home in Englewood. “Have you ever had teeth removed or crowned because of a cavity?”

Though they seem to have little to do with motherhood or infant mortality, these questions are borrowed from Cuban medical professionals who are visiting Chicago and who are also sitting alongside — and collaborating with — Tossas-Milligan.

“Cuba is not a rich country,” said José Armando Villamarín, one of the Cuban doctors. “[So] we have to develop the human resources at the primary health care level.”

That means doctors on the island nation lean on cheaper home visits and health surveys to catch problems early.

The home visits in Chicago came out of a partnership between the Cuban and Ministry of Public Health and the University of Illinois Cancer Center. The program has Cuban doctors and a nurse embedded in Chicago between August and December, and they join their US counterparts in visiting the homes of 50 women of reproductive age in Englewood.

In exchange for a $50 stipend, the women answer dozens of questions on topics ranging from the state of their home to their emotional well-being. The project is funded by a $1 million grant from the Kellogg Foundation, which has also paid for some American healthcare workers to visit Cuba.

In Chicago, researchers plan to use the data they gather to classify women into four risk groups. Those deemed at a higher risk will be recommended for additional home visits. The idea, Tossas-Milligan said, is to address these women’s medical issues at an early stage and at home as much as possible to avoid costly hospital bills.

“What we are hoping to discover is issues in Englewood that truly impact health, that are not being collected,” she said, “that the doctors cannot see when they come and see [a] woman and prescribe her one pill.”

One question the team has been asking women, for example, is when they had last seen a dentist. Gum disease, while unlikely to come up during an expectant mother’s hospital visit, has been linked to premature birth.

In her interview, Flowers said she hadn’t been to a dentist “since 1999 or 2000,” which she attributed to a lack of insurance and a long-time fear of the dentist. And at 47, Flowers has had a difficult obstetric history: She’s had three miscarriages and one premature birth. Her baby did not survive.

Flowers, who said she has had “barebones” insurance or been on Medicaid for much of her adult life, first attempted a planned pregnancy in 2003, with her then-fiance. She visited a doctor who, Flowers recalled, said she may have an ovarian cyst. But before they went any further Flowers’ fiance was killed in an accident. She tried to get pregnant with a different partner in 2009, she said, and visited a different doctor for help. But that doctor, offered under a different health insurance plan, was not aware of her previous treatment, Flowers said, “Because you only get a limited amount of time with the doctors, and there is only so much that I remembered.”

Tossas-Milligan and Villamarín said that even if Flowers does not try and get pregnant again, that simply having that information — and having it in one place — could help them head off problems facing other potential mothers in the neighborhood.

The US healthcare workers would like to scale up this system to address other key health problems in underserved parts of the city.

Experts who have studied Cuba’s healthcare system say that is an idea worth exploring, but it would require much more than just home visits and health surveys.

“When a doctor or team [in Cuba] finds there problems in the home and they think it has any bearing on her pregnancy, she gets help,” said Mary Anne Mercer at the University of Washington’s School of Public Health.

Mercer noted that although Cuba is not as wealthy as the US, it makes more resources available to at-risk women. In Cuba, she says, a pregnant woman who isn’t getting enough to eat will be fed because of government-issued rations. A woman in the same situation in Englewood might get more attention under this pilot project, but her groceries would have to come from somewhere else.

The US health workers tackling this new approach say they get how hard it would be to make what happens in Cuba happen here in Chicago. But they think it’s worth trying.