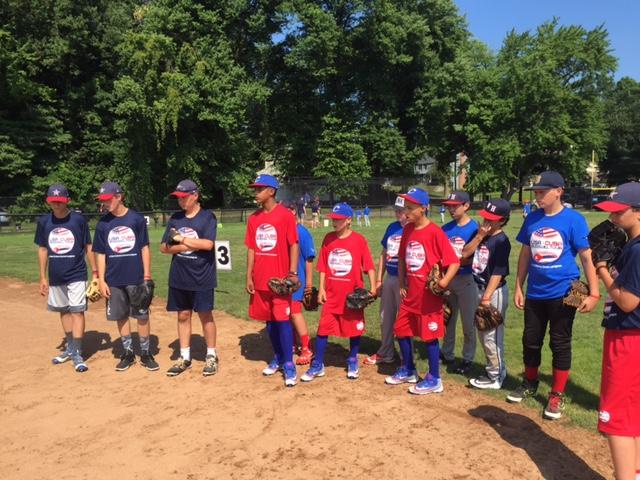 Back in April, young baseball players from West Hartford traveled to Holguin, Cuba, the first leg of the 2016 USA Cuba Goodwill Tour.

The West Hartford team was greeted warmly by the people of Holguin, and became fast friends with the Holguin team. The Americans also donated baseball equipment, as well as musical instruments, school supplies, and dental kits to the children of Holguin.

On Sunday, thanks to an easing of travel restrictions between both countries, 20 players and coaches from Holguin arrived in West Hartford for their first experience playing ball in the United States.

“It started literally in a truck, traveling overnight from Holguin to the area of Matanzas, which is near Havana,” Brennan said. “Then they flew to Toronto, from Toronto to Montreal, and then bussed from Montreal to West Hartford overnight. And then we played them in baseball the next day and they beat us.”

“I’m very happy to be here,” said Elder Perez, 13, who plays center field for the Cuban team. Perez said he misses Holguin and his family a lot, but is thrilled to be in the United States. “I never thought I could come to this place and play baseball,” he said.

On Monday, the boys went to Fenway Park for a Red Sox Game. On Tuesday, they made the pilgrimage to what Cuban coach Karel Garcia called the iglesia de baseball — the Baseball Hall of Fame in Cooperstown, New York.

On Wednesday, it was back to basics with clinic day. Some 30 coaches, along with some special guests took the players through their paces with innovative drills, and lots of calisthenics.

“We’re gonna build you from the ground up,” legendary Red Sox pitcher Bill “Spaceman” Lee told the players. “Remember that — everything is from right here,” said a crouching Lee. “Everything is with a bent knee, balls on your feet. You play this game on the balls of your feet. You gotta have quick feet.”

Also on hand is another legendary Red Sox pitcher — Cuban native Luis Tiant.  Tiant said he’s proud of the players from Holguin and that efforts like the USA Cuba Goodwill Tour can do more to foster good relations between the two countries than an army of politicians and diplomats.

“We can open more doors than the politicians,” Tiant said, laughing. “Baseball is a good thing, it’s a goodwill. And they understand that we’re all the same. No matter what country you’re from, no matter what color you are, no matter what language you speak.”

“We all play baseball, we all have a love for it. It’s just we live different places and in different cultures,” said 13-year-old Andrew Gingold, who was part of the West Hartford team that visited Holguin in April. Gingold said despite the language and the culture, the players on both teams have a lot in common, though with one exception — the Cuban players are really, really good.

“We’ve lost all six games against the Cubans, but we’ve put up some good competition against them,” Gingold said. “They’re great players. There’s a lot of competition, which makes us better baseball players.”

The Cuban players head back to Holguin on Tuesday. Before then, they will visit the ESPN studios, Bristol’s historic baseball mecca Muzzy Field, and the Connecticut Science Center. They’ll also have a handful of opportunities between now and then to defend their winning streak  against their American friends.