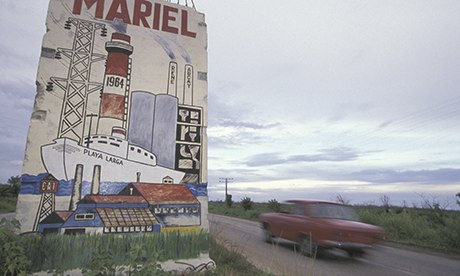 A car passes a welcome sign for Mariel, once the start of the infamous Mariel boatlift and docking point in the Cuban missile crisis. Photograph: Najlah Feanny-Hicks/Corbis Saba

The road to reform in Cuba is still being mapped out by President Rául Castro, but the direction can be seen on the 30-mile stretch of coast between Havana and Mariel.

The journey starts in the capital, cradle of Latin American revolutionary fervour, and ends an hour or so west in a quiet port.

It is here that Cuba is betting its economic future on one of the biggest development projects in its history – a special free-trade zone that aims to attract foreign investment and, more hopefully, US support, with modern facilities and market-friendly tax breaks.

The surprisingly straight route between the two passes Zone Zero – the high-security district where Fidel Castro is living out his final days – and the Hemingway Marina, which has been upgraded to provide more berths for luxury yachts and better facilities for the international sports fishermen who visit each year for the annual marlin competition. 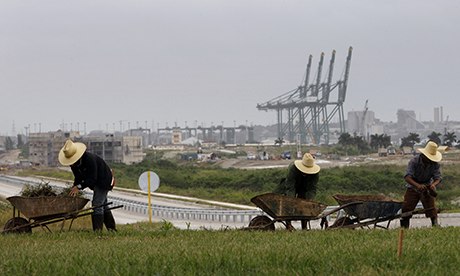 Workers landscape the area near a new port under construction in Mariel, Cuba. Photograph: Franklin Reyes/APThe roadsides are agreeably empty. There are few buildings and – perhaps because it is a holiday – little sign of agricultural activity in the fields until Mariel announces itself with an ugly plume of sulphurous smoke belching out from a power plant.

Beside it stand the silos of a cement factory, emblazoned with the Cuban flag and the slogan Patria o Muerte (homeland or death).

Mariel is poised to play an important part in Cuba’s development with a new deepwater container port and the free-trade zone built on the site of a former submarine base, a project that aims to exploit the planned expansion of the Panama canal by providing the best facilities in the region for giant vessels. 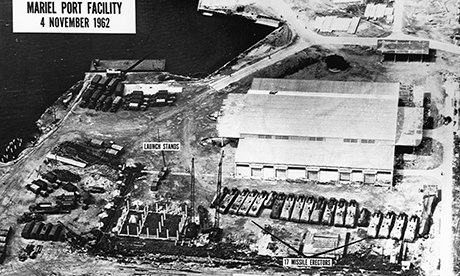 An aerial intelligence photograph of missile erectors and launch stands at the Mariel Port Facility in Cuba during the Cuban Missile Crisis. Photograph: CORBIS

“This is one of the biggest projects we’ve undertaken since the revolution. I hope it’ll help to end the blockade,” said María Vitória Bernase of the Havana-based Latin American and Caribbean Economic Association.

“The United States has no bays in the south that are so deep, so this will be good for them. Cuba is the key to the Gulf [of Mexico]. There is no other bay in the region with the depth of Mariel. We will develop it as a transport hub and a warehouse centre.”

The project is well under way. At the entrance of the construction site squats a new four-lane motorway that will eventually cross the island.

For now, it just cuts through tracts of reeds, low palm and wild sugar cane into the main development zone, where Chinese trucks loaded with gravel and sand go back and forth as earthmovers clear earth and shrubs. The port project is reportedly being built by Odebrecht, with Brazilian financing. Once complete it will be run by a Singaporean port operator, PSA International.

Promotional material for the project suggests it will resemble the special economic development zones such as those that galvanised and opened up China’s and Vietnam’s economies. Compared with the rest of the island, firms will face fewer restrictions on hiring, lower tax burdens and no requirement to enter into joint ventures with local state-run firms.

“It’s a step in the right direction,” said a European diplomat. “One of the biggest challenges in Cuba is the business environment. It’s not an easy place to operate. But if Mariel is successful they will create similar zones elsewhere.” 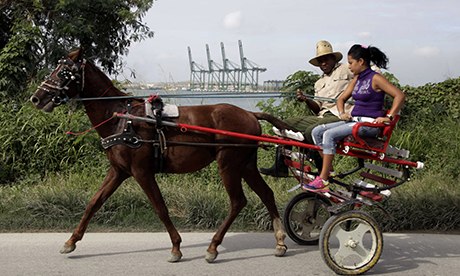 A horse-drawn carriage passes the port under construction at Mariel, Cuba.
For the residents of Mariel, the new port means new jobs, a window into the global economy and perhaps a few more cars on the streets. (AP Photo/Franklin Reyes) Photograph: Franklin Reyes/AP

The project is the centrepiece of Rául Castro’s 2010 economic modernisation plan, which aims to improve efficiency and raise productivity by boosting incentives and upgrading infrastructure.

State-run industries are supposed to shed 1m jobs, with more opportunities opened up to private business.

The results are apparent on the streets, where family-run restaurants known as paladares have proliferated, along with clothes shops set up in living rooms.

The government has issued licences for about 200 types of private businesses, from gardening to floristry. The government estimates more than 400,000 people are employed this way.

Farmers have been given more autonomy and price incentives to produce more food. The government has eased overseas travel restrictions, loosened pay ceilings for baseball players, promised to abolish the dual-currency system and ended controls on car sales.

Bernase says the changes constitute an economic revolution: “We’re modernising everything now. You can see the change in daily life and on the streets, where people are opening restaurants and small shops … There’s been such an explosion in the past year that we haven’t been able to fully quantify it yet.”

Some entrepreneurs are pushing ahead with, as yet, unapproved businesses. It is only a matter of time, they assume, until they get the go-ahead.

On the edge of Mariel bay sits an abandoned bar in the rusting metal hull of an old ship. It is a forlorn sight. The pool outside is full of murky water and vultures circle overhead.

The one new object is a wooden pool table, freshly carved, lovingly polished and topped with imported baize and leather pockets.

It is a prototype made by Osvaldo Pejuero, a young entrepreneur who plans to start a pool table business as soon as the government lifts the ban on a sport long associated with gambling and capitalism.

“I taught myself how to make them,” says Pejuero, who sports a gold watch and necklace. “I’ve sold a few and I’m trying to organise a national pool federation. It still hasn’t been officially approved, but there are more and more tables appearing all the time.” 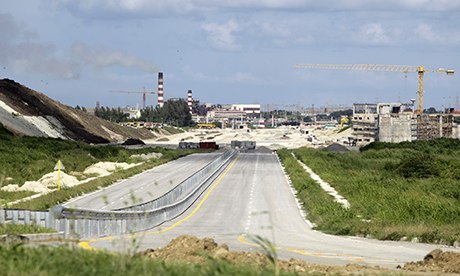 Pejuero hopes the bar can be renovated in time for an expected rush of business when the first phase of Mariel’s redevelopment is completed next year.

“This place has been steadily run down under bad government management, but in future perhaps it can be taken over by private investors. When things are in government hands they go slowly. When private firms take over, they go fast,” he said.

Among the reasons for change are a sclerotic economy, exacerbated by the US embargo and a fast-ageing society that looks likely to raise the costs of Cuba’s impressive healthcare system, which the government has pledged to maintain. But there are many obstacles to reform, much to the frustration of local businesses.

Alvaro Ramos, a cement plant manager, says his company should be cashing in on the development project because it produces such high-grade concrete that even the US military buys it – via a third party to circumnavigate the embargo – to reinforce its bases in the Middle East.

But he says business is held back by the four state firms with a stake in the factory and the low financial incentives for local staff.

Like many Cubans, he has to take on extra jobs because he cannot get by on his regular salary of less than $30 (£18) a month. One of his bosses – employed with a joint-venture partner – gets paid $12,000.

“There’s not much motivation,” he says. “I don’t expect a big change. I sympathise with those old leaders. They can’t change quickly so everything will take time.”

The state sector is still thought to account for more than 90% of the Cuban economy. Sceptics doubt that the many small steps taken over the past two years will prompt huge long-term change, particularly while Castro talks of “updating” socialism rather than instituting market reforms.

The European diplomat said Havana’s roadmap remained a work in progress: “What is the end goal? Honestly, I don’t think they know.”

What is certain is that there is no turning back. Castro has declared the modernisation of the economy “irreversible”.

And while his comments on the evolving hybrid of socialism and capitalism may sometimes seem contradictory, the same was also true of Chinese leaders during the early stages of their country’s opening up.

China’s success was initially driven by a flood of foreign, particularly US, capital. Whether Cuba’s reforms can be as transformative will also depend to a large extent on the outside world.

That is why Mariel could prove important. More than just an infrastructure project, it appears intended as a welcome mat.

At present, US investors are forbidden from stepping in by the economic embargo, although there are faint signs that Washington may be more willing than usual to soften its stance.

Barack Obama has called for a new approach, and the country’s leaders shook hands for the first time in a decade at the memorial service for Nelson Mandela.

It is too early to say whether that will herald a shift in US policy, but one thing is clear: the policy change that could make the biggest difference to Cuba will be decided not in Havana or Mariel, but in Washington.

Despite its sleepy appearance Mariel has played a central role in Cuba’s modern history.

As the nearest port to the US, this was for many years the gateway between the two countries with two ferries a day running.

Such was the traffic that US gangster Lucky Luciano was said to be planning a casino on the hill that overlooks the town until his scheme was interrupted by the 1959 revolution.

Three years later, Mariel was where Russian naval vessels docked to unload the nuclear warheads that led to the 1962 Cuban missile crisis.

This entry was posted in The Blockade? and tagged cuba, embargo, Mariel. Bookmark the permalink.