‘We Are No Longer Your Backyard’: Bolivia’s Evo Morales Condemns US Interventionism in Venezuela, Latin America 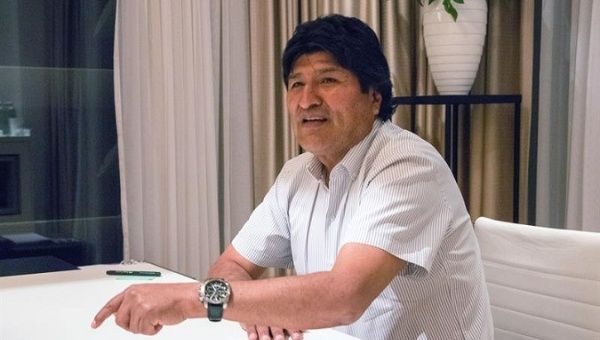 Morales explained, however, that United States’ interventionism is not only militaristic. | Photo: EFE

The Bolivian President warned that the United States is trying to orchestrate a military coup in Venezuela.

June 16 (teleSUR) Bolivian President Evo Morales said Saturday that Latin America “is no longer the United States’ backyard” while denouncing the United States’ attempt to convince its South American allies to help it orchestrate a military intervention or coup in Venezuela.

In an interview with news agency EFE, Morales explained that several Latin American leaders have confided in him that U.S. Vice president Mike Pence is “trying to convince some United States-friendly countries” help them seize control of the South American country and replace the current government led by Nicolas Maduro.

The real target, Morales explained, is not the Venezuelan president but “Venezuelan oil, and Venezuelans know that.”

Drawing parallels to 2011 military intervention in Libya, Morales said the U.S. isn’t interested in helping with alleged humanitarian crisis since, despite the current political and social turmoil in Libya, the U.S. will not intervene there since “the country’s oil is now owned by the U.S. and some European oil companies,” Morales asserted.

“One military intervention (in the region) would only create another armed conflict,” he added pointing to Colombia’s membership in the North Atlantic Treaty Organization (NATO) as a general sign of an escalation of “military aggression to all Latin America and the Caribbean” region.

Morales explained, however, that U.S. interventionism is not only militaristic.

“When there are no military coups, they seek judicial or congressional coups” as in the case of former Brazilian President Dilma Rousseff’s impeachment and the Luiz Inacio Lula da Silva’s imprisonment, which is barring him from running in the upcoming 2018 elections.

“I am certain we will free Lula. If he returns, some countries in Latin America will again strengthen the ideological, programmatic and liberation struggle against the North American empire,” Morales said.