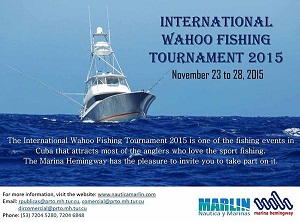 The International Wahoo Fishing Tournament (November 23-28) is looking to revive the broad appeal it once enjoyed, with a program including four days of fishing, combining recreation and sport, and prizes for the three top teams, the biggest.

It’s no secret that the international Swordfish tournaments hosted annually at the Hemingway Marina enjoy worldwide recognition. However, after an almost 12 year absence and given continual demands by foreign and national captains and fishers, Cuba’s coasts are once again welcoming Wahoo fishing.

Organized in accordance with International Sport Fishing Association regulations and using the trolling catch and weigh method, the competition (taking place at the Hemingway Marina) is sponsored by tourism agency ECOTUR and allows a maximum of six fishers per team.

With a program which includes four days of fishing, the event combines recreation and sport, presenting awards to the three top teams, the biggest Wahoo and Tuna, the biggest catches made by a women and the youngest fishers.

In addition to the main service it provides (docking in storm-safe canals), the Marina also offers boat rentals (with a highly-qualified crew, fishing tackle, bait and snacks), equipped with fresh water, electricity, metrological information, repair tools, fuel, as well as other provisions.

Motivated by the thawing of relations between Cuba and the United States, the event expects to see the participation of Cuban, European and U.S. boats (traveling under a general license).

According to Ramón Jiménez, director general of the Hemingway Marina, work must be done to revive the prestige of this center, in order to preserve fishing traditions which contribute to the development of the country, as well as maintain infrastructure and promote potential future investments.

Despite the fact that the “Ernest Hemingway” fishing tournament is the only one of its kind to have been maintained to date, Cuba’s most famous marina will attempt to revive all past competitions. In addition to Wahoo and Swordfish tournaments, the Marina previously hosted an event dedicated to marlin fishing (scheduled to be re-launched in September 2016) and the Hispanidad competition (previously held in Marina Tarará).

Jiménez reports that next year will also see 11 regattas, the first of which will set off in January and feature around 50 boats. “In these cases, for example, this variety of sailing requires that long-lasting, dry foodstuffs be carried on board,” notes the expert.

According to the Hemingway Marina’s business manager, Dargel Machado, stays at the facility (affiliated with the Marlin S.A. Business Group), are unique, given that all those who arrive to the marina can stay onboard their boats, eliminating the need to provide accommodations.

“However, there are wealthy clients who opt to stay in other places (nearby hotels such as the Palco, Comodoro and Meliá Habana). This also occurs when the boats arrive with a greater number of people that it can accommodate, he explains to Granma International.

In regards to the Wahoo 2015 tournament, Machado stated that participants are scheduled to stay in the Hotel Acuario (managed by Cubanacán and located within the Marina area).

Upon docking – adds the business manager – all boats’ bathrooms will be closed in order to prevent waste from being discharged into the sea, while participants will be able to enjoy complementary services, including hygiene facilities, cafes, markets, restaurants, specialist shops, a swimming pool and a blowing alley.

Set in a prime location, today the Hemingway Marina has 180 docking berths, with the potential to offer a total of 400, as confirmed by various studies.

The so-calledWahoo fish, also known as “Ono” meaning ‘good to eat’ in the Hawaiian Pidgin language, lives in deep waters (20-25 meters) in various regions across the planet and is renowned for its long, bullet shaped body.

With silver-blue scales, the Wahoo can swim at speeds of up to 70 kilometers, has powerful teeth, can grow up to two-and-a-half meters long and weighs around 30 pounds (although it can reach up to 150).

Regarding this fish, Jiménez notes that the Wahoo is a species which feeds between 10am and 1pm and unlike the Sword fish is currently not an endangered species, and thus is caught to be consumed.

The director also states that the largest Wahoos tend to swim alone or in small groups, but feed at great depths, requiring the use of wire to ensure that the bait descends to the sufficient depth.