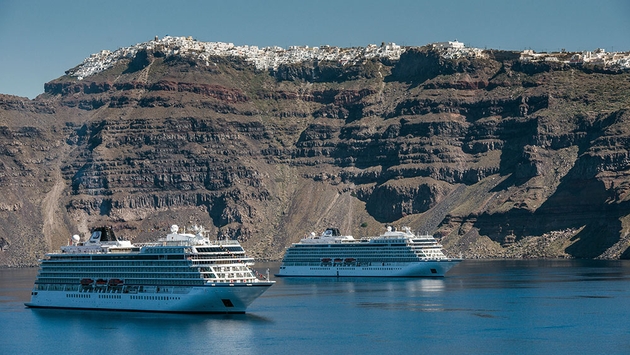 As Viking Cruises continues to expand from the rivers to the oceans of the world, its fleet expands as does its future itineraries. The Viking Star and Viking Sea are already plowing ocean waters, and the Viking Sky and Viking Sun will follow in early and late 2017 respectively. Six ships are planned to launch in total through 2020, and the fifth has now been named Viking Spirit for a 2018 debut.

In 2017 and 2018, 10 new itineraries will be offered, adding over 30 new ports of call. Itinerary highlights will include Europe and the Americas as well as the Caribbean and even Cuba. In fact, Viking Sun’s maiden voyage in December 2017 will be a 141-day world cruise, also featuring Cuba and sailing from Miami to London across five continents, 35 countries and 66 ports.

“As we continue to grow our fleet, we have more opportunities to offer guests new and different options for experiencing the Viking way of destination-focused cruising, an approach that is completely unique in the industry,” said Torstein Hagen, Chairman of Viking Cruises. “Our guests are experienced travelers who are curious about the great art, history and cultures of the world, which is why we design our ships and itineraries to help immerse them in the destinations they visit.”

Besides the world cruise, the 10 new itineraries, ranging in length from eight to 22 days, are outlined below:

Trade Routes of the Middle Ages – (From Bergen to Barcelona on Viking Star; September 2017, May 2018): The 15-day sailing will trace trade routes of the Middle Ages, departing Norway. Seven countries and 10 ports will highlight Amsterdam, Paris, and two calls each in England, Portugal and Spain. Veranda staterooms start at $3,999 per person.

Venice, the Adriatic and Greece – (From Venice to Athens on Viking Sun and Viking Spirit; October 2017, July-August 2018): The eight-day itinerary will feature the Adriatic Sea coast from Italy to Greece, beginning with an overnight stay in Venice. Ports will include stops in Croatia, Montenegro and more in Greece. Veranda staterooms start at $2,499 per person.

South America and the Caribbean – (From San Juan to San Juan on Viking Sea and Viking Sky; October-December 2017, January-March 2018): The 11-day voyage covers the southernmost Caribbean and even the northern part of South America. Six countries and seven ports will include the Dominican Republic, Aruba, Curacao, Cartagena and Santa Maria, Columbia and Caracas, Venezuela. Veranda staterooms start at $3,199 per person.

New York, Bermuda and the Western Indies – (From New York to San Juan on Viking Sea and Viking Sky; October 2017, September 2018): The 15-day itinerary heads from New York to the Caribbean, visiting nine countries and ports along the way. Ports will include Bermuda, Guadeloupe, St. Kitt’s, St. Martin, St. Thomas and others with stops at UNESCO World Heritage Sites also. Veranda staterooms start at $3,599 per person.

Iconic Cities of the Western Mediterranean – (From Barcelona to Rome on Viking Sun and Viking Spirit; November-December 2017, January, February, April, July and September 2018): The eight-day cruise will sail for the French Riviera and Italian highlights in the Mediterranean with stops at Barcelona, St. Tropez, Monte Carlo, Tuscany and Rome. Veranda staterooms start at $1,999 per person.

From the Caribbean to the Amazon – (From San Juan to San Juan on Viking Sea; December 2017): The extensive 22-day cruise explores the Caribbean and South America. Ports will include a vast range from Barbados, St. Lucia, Antigua, St. Thomas and Puerto Rico to the Amazon River in Brazil. Veranda staterooms start at $5,999 per person.

Southern Mediterranean Discovery – (From Rome to Barcelona on Viking Star; December 2017, January-March 2018): The eight-day voyage sails the southern Mediterranean from Italy to Spain, encompassing the likes of Sicily and Sardinia as well as Tunis and the Casbah of Algiers, before ending in Valencia and Barcelona. Veranda staterooms start at $1,999 per person.

British Isles Explorer – (From Bergen to London on Viking Sun; May and August 2018): The 15-day cruise covers northern and southern British Isles as well as Viking outposts: Shetland and Orkney Islands. Also showcased will be the Scottish Highlands, Wales and the cities of Dublin, London and Bergen. Veranda staterooms start at $5,999 per person.

Italian Sojourn – (From Rome to Venice on Viking Sun and Viking Spirit; April and July-August 2018): The eight-day cruise starts in the Eternal City and ends in the legendary Italian port city with seven stops between Italy and Croatia. Highlights will include Sicily for Mt. Etna and Bari, Italy and Sibenik, Croatia for UNESCO World Heritage Sites. Veranda staterooms start at $2,599 per person.