Venezuela’s UN Ambassador Hits Out at US Double Standards 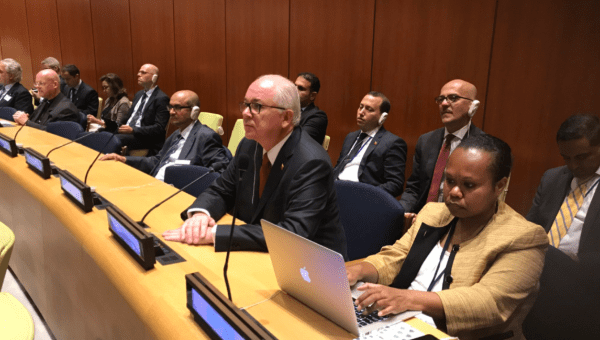 Ramirez also condemned the U.S. attempts to use the U.N. Security Council to promote an intervention in Venezuela

The Venezuelan ambassador to the United Nations Rafael Ramirez has said the United States is consistent with its aggressive attitude on a unilateral basis, but contradictory within the Security Council.

Speaking at the U.N. General Assembly in New York, Ramirez said “The United States is consistent in what has been its attitude and aggressiveness towards the world, but inconsistent in what they proclaim in the United Nations, because in practice they do the opposite.”

He added that Washington talks about human rights, but its military troops have intervened in Syria without the consent of the people, and remains silent about the situation in Yemen.

Ramirez also condemned the U.S. attempts to use the U.N. Security Council to promote an intervention in Venezuela, a maneuver that was rejected by other member states.

Interviewed later on Venezuelan state television, the ambassador pointed out that the U.N. Secretary General Antonio Guterres has fostered a climate for foreign non-intervention in Latin America and especially in Venezuela.

The annual U.N. General Assembly starts on Tuesday. Venezuela will be represented by the nation’s Foreign Minister Jorge Arreaza.

Arreaza will make his address on September 23.