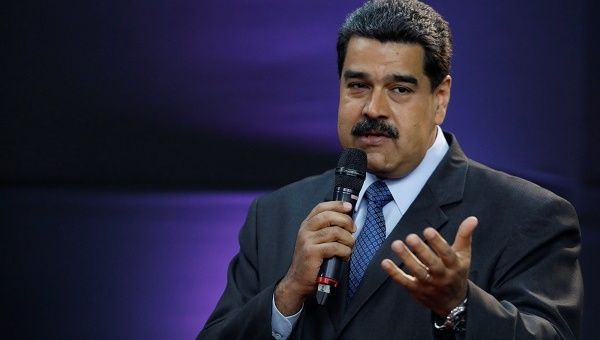 The president also addressed the “ridiculous, illegal” sanctions against the nation, describing the U.S.-led economic war as unprecedented in Venezuela’s history.

Feb 24 (teleSUR) Venezuelan President Nicolas Maduro has given a lengthy interview to state media at Miraflores Palace in Caracas, during which he defends his nation’s democratic and socialist values in the face of ongoing international attacks.

Not once in Venezuela’s 200-year struggle for independence has the country allowed itself to be led by a dictator, Maduro said, addressing criticisms by global groups such as Amnesty International.

He also pointed out that during the 19 years since the beginning of the Bolivarian Revolution spearheaded by the late Hugo Chavez, 24 elections have taken place, of which the government won 22, including a referendum.

“Tell me which government on this continent has a 55 percent intention to vote; none of us, but we have it because we have maintained the union of the high command,” he said.

Maduro also noted that certain Venezuelan leaders are barred from taking part in the elections, having committed “crimes against humanity” or because they have been convicted of corruption.

The president also addressed the “ridiculous, illegal” sanctions in place against the nation, describing the U.S.-led economic war as unprecedented in Venezuela’s history.

Later, Maduro blamed corruption among the upper echelons of the Organization of the Petroleum Exporting Countries (OPEC) for fluctuating oil prices, promising to recover 70 percent of the country’s lost oil production in the first half of 2018.

“I can tell you, the unprecedented injustices led to an important fall of a million barrels of oil. I think that in the first half of this year, we will have recovered 70 percent of production,” he said.

On a more positive note, Maduro called attention to the Local Supply and Production Committees (CLAP) program, which delivers food to Venezuelans at low prices, and the 0800- SALUD-YA system, which provides essential medicines.

Regarding the April 22 presidential elections, Maduro said: “Before, during and after I will call for dialogue, because the opposition is afraid of dialogue; it is afraid of compromise.”