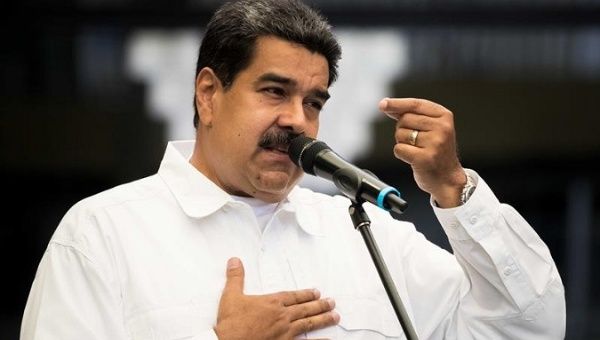 “Once Venezuela chooses me as president… I will call for a great national dialogue for peace,” said Venezuelan President Nicolas Maduro.

May 8 (teleSUR) Venezuela’s President Nicolas Maduro has vowed that if he wins the May 20 presidential elections, he will call for a new national peace dialogue to be held in the Dominican Republic and include every political and social force in the Latin American country.

“Once Venezuela chooses me as president… I will call for a great national dialogue for peace,” said Maduro during a campaign event transmitted by national TV.

After several rounds of negotiations late last year in Santo Domingo, opposition leaders decided not to sign an agreement that had been reached between their representatives and those of the government.

Electoral authorities brought forward the date of the elections to May 20, but a part of the opposition is still boycotting them. The Democratic Unity Board (MUD) claims the electoral process lacks transparency and predicts there will be widespread fraud.

Main opposition candidate Henri Falcon ignored the MUD boycott, however, and is running in the elections. He’s currently in second place in the opinion polls, behind President Maduro.

“We have an incapable and inept president, in no condition to generate control and policies that can solve Venezuelans’ problems,” Falcon posted on his Twitter account.

Falcon has severely criticized the MUD, of which he used to be part, for boycotting the elections. On May 4, a day after the MUD reaffirmed their boycott, Falcon said such opposition groups will disappear because of their attitude.

Timoteo Zambrano, representative at the suspended National Assembly (AN), announced the creation of a parliamentary platform called ‘Let’s Change’ (Cambiemos, in Spanish) in support of Falcon. The group is also supported by representatives Teodoro Campos and the first vice-president of the AN, Julio Cesar Reyes.