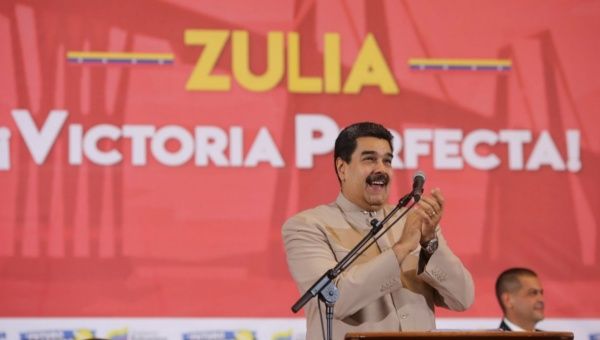 From the anti-austerity protests in Brazil and Argentina to the corruption shake-ups in the Dominican Republic and Peru as well as the recent election turmoil in Honduras, most countries in the region witnessed considerable political strife alongside the continued economic sluggishness hampering Latin America since the 2014 dip in commodity prices.

Despite this generalized regional turbulence, Venezuela and its President, Nicolas Maduro, have received the brunt of scrutiny from media and political quarters of all stripes.

The first half of the year looked poised to be the tipping point, after months of deadly, opposition-led protests calling for Maduro’s ouster coupled with persistent attempts by U.S.-allied nations to isolate the country and force measures on it. U.S. President Donald Trump even took the unprecedented step of acknowledging that a “military solution” was not off the table for the South American nation.

Venezuela’s opposition began positioning themselves at this time as a government in waiting, with prominent leaders alluding to the ‘zero-hour’ and frantically meeting with their allies internationally.

Fast forward to year’s end and the Venezuelan leader is still president and moreover, finds himself in a position of strength.

“There is an ascendant leadership, and that is leadership of President Maduro, which is something confirmed by many surveys,” Gustavo Borges Revilla, director of the Venezuelan investigative digital outlet Mision Verdad, says.

Maduro’s United Socialist Party, or Psuv, achieved near sweeps in regional and municipal elections in October and December respectively, while the Constituent Assembly vote in July also delivered a friendly outcome.

According to Borges, Maduro has also been able to assert his leadership of a movement that had been declared all but dead outside of the country.

“He has managed to rebuild his authority … all leaders of the party have rallied around him.”

At the same time, his adversaries have not only lost considerable terrain, but also the organizational and strategic unity that has proven to be elusive among Venezuela’s opposition groups.

The remarkable turn of events, which comes on the advent of presidential elections in 2018, is not a matter of luck, Borges insists, and also sets the stage for something that few thought likely just months ago – the possibility of Maduro’s re-election.

While Maduro has long been a prominent figure in the government of late president Hugo Chavez, he was not necessarily the heir-apparent to El Comandante.

“We must remember that President Maduro took control of the Venezuelan state at a very difficult and complex moment, in the midst of much confusion,” Borges says.

The steep drop in oil prices, opposition protest violence in 2013 and 2014 and heavily personalized attacks by media projected the image of a country without a figure in control. The shadow of the charismatic Chavez loomed large, and Maduro had the unenviable task of dealing with the country’s problems at the same time as regrouping his support.

“Rebuilding the political base and groups amid the confusion generated by the death of Comandante Chavez took at least two years,” says Borges.

In December 2015 however, Venezuela’s opposition made their biggest breakthrough in 15 years by winning 56 percent in the country’s legislative elections. The 109 seats obtained gave the MUD coalition a considerable majority in the National Assembly.

For over a year, the country’s legislative branch was used not only as a tribune against Maduro and his administration but also as a vehicle to stifle his initiative and seek his removal. Among the first measures passed by the assembly including motions to reduce his presidential term, which was ultimately declared unconstitutional and paved the path to continuous clashes between the branches of government.

Maduro’s administration responded by using legal methods to “nullifying the mechanisms of sabotage and collapse of the state, which was the plan of the opposition,” Borges says.

The annulling of election results in Amazonas state led to a Supreme Court declaration that the National Assembly was acting ‘in contempt,’ given the refusal to have the Amazonas legislators step down.

It was also in 2016 that the Venezuelan opposition failed in their attempts to convene a recall referendum against Maduro, with election officials citing thousands of fraudulent signatures and impossible timelines.

These steps were taken in accordance with Venezuelan law, Borges says.

Nonetheless, these measures provided Venezuela’s opposition with fodder for claims that Maduro was enacting a ‘dictatorship’ – a spectre that was also evoked frequently during Chavez’s presidency.

Meanwhile, diplomatic pressures through the Organization of American States, where the opposition has found a staunch ally in General Secretary Luis Almagro, began to mount, and the country’s economic prospects failed to improve.

Out of the Fire

As they did throughout 2016, the opposition-controlled National Assembly began 2017 by attempting once again to remove Maduro.

On Jan. 9, the assembly declared President Maduro had ‘abandoned’ his post and also accused him of “breach of the constitutional and democratic order.”

Small protests continued in the following months, spurred on by the surprising and increasing opposition of attorney general, Luisa Ortega Diaz, to decisions taken by the executive.

In early April, a seemingly procedural ruling by the Supreme Court authorizing a joint-venture became a catalyst for the opposition to ratchet up pressure against Maduro. The top court ruled they had the authority to approve the measure while the National Assembly maintained their position to not comply with previous court ruling – a statement that opposition leader decried as tantamount to a dissolution of the legislature.

Even though the decision was later reversed, the opposition called its supporters to the streets and progressively intensified their calls and positions. For almost 4 months, the country was gripped by protest violence that claimed the lives of over 100 peoples and left thousands injured. The victims were predominantly bystanders and included horrific lynchings of people perceived to be ‘Chavistas.’

Speaking to supporters for International Worker’s Day, Maduro said he would use his authority within the constitution to convene an election for a constituent assembly as a means to create dialogue and find peace. The opposition balked, continuing their calls for street pressure to push Maduro out of the Miraflores Palace.

The results of the vote on July 30 had little surprises, as the opposition insisted they would not recognize the constituent assembly.

Nonetheless, despite promises by opposition leaders to stop the vote and continue the ‘resistance,’ the street violence stopped almost immediately after the Constituent Assembly took place.

Less than 3 months later, Chavistas won 19 of 23 governorships. In December, Maduro’s allies won over 300 local governments including all state capitals and even former bastions of the opposition in municipal elections.

Ortega Diaz also left the country for neighbouring Colombia where she accused the government of corruption and rampant impunity, despite herself being accused of facilitating corruption and impunity after almost a decade as the country’s top lawyer.

The dramatic and rapid change in the correlation of forces gave Maduro grounds to claim victory over his foes.

“The year 2017 was the year of threats of violence and aggression that our country (has never faced) before,” Maduro told military officials at a year-end ceremony. “It was the year of the popular union of the Bolivarian National Armed Forces, of the peasant workers, of the workers … a year of victory for peace.”

While not officially declaring his intentions to run next year as of yet, he also predicted 2018 would be a year of “victories.”

Maduro certainly enters the new year on more solid footing than in 2017, however, he still faces major challenges.

“The hardest thing to tackle is the economy – every sector of Venezuelan society knows that,” Borges acknowledges.

While the plummet in the price of crude that coincided with the start of Maduro’s administration has continued to be a significant driver for the economic problems facing Venezuela, other internal and external factors – including economic sanctions from Washington and lack of access to credit and markets – have colluded to push his government and the Bolivarian Revolution to the brink.

With up to 70 percent less revenue from oil and barriers to accessing credit and loans to the “unofficial blockade made official after Trump,” Borges says that the Venezuelan state has not yet been able to address internal productivity as a counter to their import problems.

“The state has not been able to consolidate mechanisms for production – there have been advances in agriculture, but it’s obviously not enough.”

The CLAP food program has had some success in circumventing the hoarding and speculation that has frustrated most Venezuelans over the last couple of years, dramatic shifts in costs and availability of goods continue to be the bane of Venezuelan life.

Yet for Borges, Maduro’s recent wins in the political sphere, which include commitments by key opposition leaders to dialogue, mean he is better positioned to bring the economy under control.

“One of the things that doesn’t allow you to govern the economy is political conflict,” the journalist says, meaning that the absence of clashes between branches of government and the possibility of a positive outcome to the Unasur-facilitated dialogues could be good news for Venezuela’s economic prospects in 2018.

The last quarter of the year also saw the Venezuelan president announce major reforms including a shift away from the petrodollar, the creation of a cryptocurrency and also a departure from price controls.

The moves have not yet been fully implemented and so no major impact had been registered as of yet, but there is little doubt that the economy will be the major issue as Venezuelan’s go to the polls in 2018.

The recent election results have not only put Maduro at an advantage over his right-wing adversaries, but it has also answered challenges to his leadership within Chavismo as well as concerns about the prospects of a coup.

For Borges, the results show that Maduro’s plan is working, that left-challenges against him are “not viable” and that despite the difficulties, the Bolivarian Revolution remains firm.

“Venezuela has its own political process, which has been built from below,” Borges says. “There is a civic-military unity which is difficult to break or destroy.”