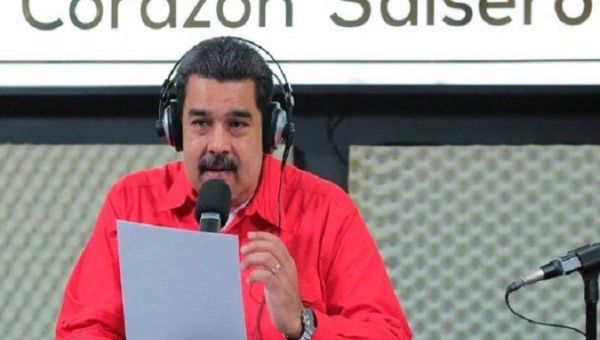 Maduro said that justice must be pursued, especially in the wake of right-wing politicians sending certain messages about Venezuela worldwide.

Dec 29 (teleSur) Venezuelan President Nicolas Maduro has affirmed his government’s commitment to peace and dialogue in announcing January 11 and 12 as the new dates for talks with members of Venezuela´s Opposition parties.

During his radio program called “La Hora de la Salsa” on Friday, Maduro stated he is a firm believer in the ongoing dialogue between the two parties but said some of the opposition representatives have acted like “terrorists” in calling for more violent protest and for sanctions and blockades against Venezuela.

“On January 11 and 12 we will have a dialogue, but with whom, with some terrorists, but what can our delegation do?” he declared.

“You have to sit down and talk with Julio Borges, who has been out of the country for a month (with allegations of) conspiring against public finances, against foreign trade and yet he sits (without blame),” Maduro continued, referring to the right-wing leader of the opposition-controlled National Assembly.

In the broadcast, he also pressed that justice must be pursued, especially in the wake of right-wing politicians like Borges, who continue to damage the country´s image internationally, that image he says has resulted in sanctions and blockades, preventing the Venezuelan people from accessing goods and basic amenities.

“I believe in dialogue, but also in justice,” Maduro emphasized.