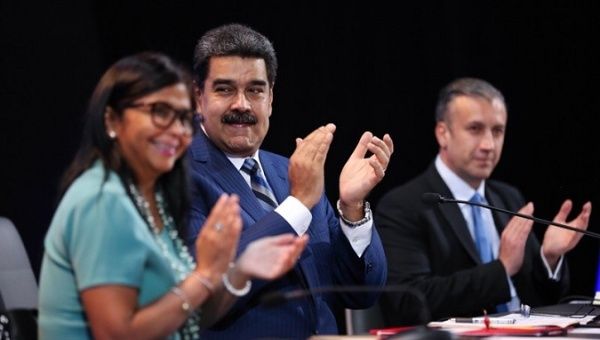 President Nicolas Maduro announces his plan during a meeting with workers along with senior officials of his government. | Photo: teleSUR

The head of state stressed that the main task of his government is focused on economic recovery, growth, and prosperity for all Venezuelans.

Oct 18 (teleSUR) Venezuelan President Nicolas Maduro urged Monday the boosting of the development potential of his country through a greater emphasis on the agri-food, industrial and pharmaceutical sectors, fundamental axes for the supply of the population.

In the framework of the launch of the National Development Plan that was held at the Teresa Carreño Theater in the capital of Caracas, the president called for the unification of efforts for “recovery, growth and economic prosperity” to achieve diversification in this area.

In addition, he announced the creation of a fund for the development of productive regions that will consist of 20 million Petros, the Venezuelan cryptocurrency, equivalent to US$1.2 million.

“It is a revolving fund, it is investing and recovering,” Maduro told the crowd. “I want to take new steps in all regions of the country: productive industries, with a model of socialist management that has been prepared by the Constituent Congress of workers.”

The head of state further stressed that the main task of his government is focused on economic recovery, growth, and prosperity for all Venezuelans.

On the other hand, the president made a call for the opposition governors of the states of Táchira, Anzoátegui, Nueva Esparta, and Mérida to participate in productive projects for the economic development of the country.

“I reiterate my call to the four governors of opposition for productive work and I always extend my hand for work, over ideological and political differences,” he said at the event.