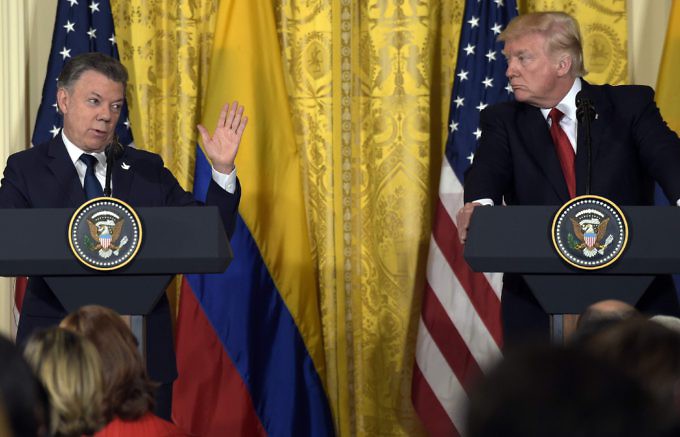 Steven Chovanec explains some of the US meddling in the recent Venezuelan elections, which, he argues, shows a clear disdain for democracy and an intention to pressure and coerce the Venezuelan people.

The Western press did its utmost to portray the recent elections in Venezuela as fraudulent. There were legitimate allegations raised, such as how Venezuelan President Nicolás Maduro offered recipients of state benefits a “prize” if they came out to vote. Therefore, an increasingly reluctant public would be compelled to vote for him to receive much-needed food and supplies.

But in reality this is only a minor example of a common practiceemployed throughout the region and surely prevalent in US-backed states. It also confuses the loyal support Maduro has amongst the poor as mere clientelism, disregarding the much more substantial impact of how the government looks after their interests & wellbeing. Despite being most harmed by the economic downturn, the poorer sectors are those most supportive of the government; not exactly what you’d call clientelism.

However, what is often not discussed is the much more substantial ways in which the elections were undermined—by the United States.

No concern for democracy

The US claims that its main reason for opposing the current Venezuelan government is because of a lack of democracy in the country.

The May 20 presidential elections were “fake,” Senator Marco Rubio said, while Vice President Pence called them a “sham.” President Trump accused Maduro of “undermining democracy” after the vote, claiming the US sanctions regime is designed to pressure the government to “restore democracy.”

Going a ways to prove that its actual stance has nothing to do with a sincere concern for democratic legitimacy, the US had already announced that the elections were a “sham” weeks before they even took place; the reality was irrelevant, the US had decided what the “real” reality would be in advance.

The Venezuelan government also invited the UN to send observers to monitor the elections, lest any “sham” or “fraudulent” irregularities take place. Those who’s foremost concern is supposedly of democratic transparency—the domestic opposition that the US supports—opposedthis move and directly petitioned the UN not to accept the invitation. In the end, the UN refused the offer.

The true reason behind this position was explained by the opposition: sending observers would “give a veneer of legality to an [electoral] process that lacks it,”—i.e., making guarantees that the vote was fair would legitimize a process we are actively trying to delegitimate. Therefore, we “asked the UN … not to validate the electoral fraud” by refusing to make sure there was no electoral fraud.

This interest was further evidenced as the opposition tended to shift its position whenever the government would give into its demands.

The government had been engaged in internationally mediated talks with the opposition for two years prior to the elections. After arduous negotiations, the two sides agreed on a number of points and were prepared to sign an agreement. On the day of the planned signing, the government showed up but the opposition didn’t, announcing that they would not sign. The blame for the breakdown was clearly placedby mediators and witnesses.

In a similar fashion, one of the main demands of the United States and the opposition was—for years—for elections to be moved forward. The implied message being that Maduro would lose them if they were, his refusal to do so therefore meaning that he is stalling for time.

During the negotiations, the election date of April 22 was agreed upon by both sides as a compromise, according to UN Rapporteur Alfred de Zayas and international mediators. After the talks broke down, the government announced that the vote would still be held on the agreed upon April 22 date. The opposition immediately denounced the moveand vowed to boycott the vote, saying the date did not provide them with enough time.

The government then held negotiations with the smaller opposition parties who had defied the boycott by entering the race, and it was agreed that the vote would be moved back a few months to provide further time for campaigning.

The main opposition coalition called the move a “farce” and continued on with its boycott.

It is not hard to see what kind of a strategy is being employed here.

Foreign meddling—Except when we do it

Imagine if Russia poured millions of dollars into the United States to aid pro-Trump MAGA supporters; if their government-linked agencies and NGO’s helped establish their organizations, payed their wages, gave resources, public outreach, and propaganda support, all to help build the movement and propel them to electoral victory. Would that be considered a foreign interference?

The US has paid millions to the Venezuelan opposition for these exact purposes. The intent of this aid, as revealed by internal documents, is to guarantee that those who respect the political and economic objectives of the US come to power. This is called “democracy.”

According to University of Chicago International Relations Professor John J. Mearsheimer, these “democracy promotion” efforts are designed to “topple regimes” that are not within the US’ “orbit” and “put in their place regimes that are basically pro-Western.”

In 2002, in Venezuela, this aid directly empowered those who conducted a short-lived and dictatorial military coup that deposed the elected government. An internal US government investigationconcluded “it is clear that … U.S. assistance programs provided training, institution building, and other support to organizations and individuals understood to be actively involved” in the coup.

Thus, the aid had served its intended purpose.

In addition to this extensive “meddling”, the US has also imposed debilitating sanctions against Venezuela. They are aimed at denying the government access to much-needed financing, thereby starving it of resources, causing it to default on its debts, and preventing it from diverting resources to alleviate the pain felt from the economic crisis. The sanctions are illegal both under international and domestic US law.

They are designed to “deepen the severe depression that Venezuela’s economy has been in for more than three and a half years,” and will directly “worsen the shortages of food and essential medicines” in order to “increase Venezuelans’ suffering in the hopes of provoking the overthrow of the government,” as economist Mark Weisbrot explained.

After coming back from an official mission to Venezuela, special UN Rapporteur Alfred de Zayas described the purpose of the sanctions as an attempt to make “the Venezuelan economy scream.” The sanctions are hurting “the Venezuelan people” and have directly “caused death,” he said.

He clarifies this, explaining that “If you need insulin and you don’t get insulin because the sanctions make it very difficult to get it, or the sanctions delay the availability of the medicine, [and] you get the medicine too late, you die.” The sanctions therefore “entail a crime against humanity, which could be brought against the International Criminal Court as a violation of Article 7 of the Statute of Rome.”

This kind of strategy, by the way, is the US government’s exact definition of terrorism. The US Code defines terrorism as “premeditated, politically motivated violence perpetrated against non-combatant targets.”

Boris Johnson, the UK Foreign Minister, defended this approach, admitting that “the downside of sanctions is that they can affect the population,” however, “Things have to get worse before they get better – and we may have to tighten the economic screw on Venezuela.”

The media, however, shamelessly report on the medical shortages without even mentioning their relation to the US sanctions, implying that the suffering is solely the fault of the government—in effect providing a valuable propaganda service to the State Department.

At the same time, administration officials like Marco Rubio, widely seen as the Trump administrations “point-man” on policy in Latin America, tow the same line: “As the country’s economy implodes and its humanitarian crisis worsens due to Maduro’s mismanagement and corruption, Venezuelans suffer shortages of food, medicine and other basic goods.”

In other words, everything going according to plan.

Hunger as a weapon

In the context of the elections, the sanctions gave the electorate a choice between a continuation of the economic pain or US sanctions relief. The US made clear that it would increase the suffering if Maduro was reelected and that relief and loans would only be forthcoming if Maduro was voted out, i.e. if “democracy is restored.”

Vice President Pence warned Venezuela ahead of the vote, saying “The United States is prepared to continue to bring all pressure to bear, working with our allies” to restore democracy in the country. Marco Rubio had said that the US would provide “fast relief” in the form of “food, medicine and other humanitarian aid to the Venezuelan people” in the event that “a post-Maduro transition government” comes to power.

An election conducted within this type of interference cannot be said to be “free and fair,” but for much different reasons than the US claims.

Originally, the US and opposition’s preferred strategy was the same one employed during the recent Constituent Assembly elections: boycott the vote so it could then be branded as an “illegitimate” government “power grab.” The success of doing this can be gleaned simply by opening any major US paper reporting on the country. They are filled with denunciations of the Assembly being “packed with Maduro supporters,” almost never mentioning that the opposition chose not to appear on the ballots.

When a popular opposition candidate, Henri Falcón, defied the boycott, knowledgeable sources disclosed that US officials had threatened to impose sanctions against him if he did not stay out of the race. It is important to note that the strategy being pursued here entails the eschewing of the political process in favor of increasing the economic pain, exacerbating the polarization of the country, and exploiting the suffering that results for political gain.

However, with Falcón maintaining his defiance of the boycott, while also proposing an economic plan fully in line with US and IMF interests, the choice between more economic pain or sanctions relief was made clear. Nothing Maduro is accused of reaches this level of coercion and intimidation; of compelling a civilian population to “vote the right way” and install the candidates the US has chosen into power. All, of course, done in the name of “democracy.”

After the elections, Trump’s “point-man” Marco Rubio clarified things just in case there was any lingering doubt about US strategy: “U.S. sanctions will go away when Maduro leaves & democracy returns,” he said.

In response to the sanctions regime, UN Rapporteur Alfred de Zayas asked: “How many people have actually lost their lives because of sanctions and because of this economic war?”

Many more now that the US is continuing to “tightening the economic screw” against the country. More, at least, until the United States’ chosen candidate comes to power.

Steven Chovanec has been writing on foreign affairs for nearly half a decade and has been freelancing for close to 3 years now. He has been published in numerous independent and activist publications, and also carries a Bachelors degree in sociology and international relations from Roosevelt University.