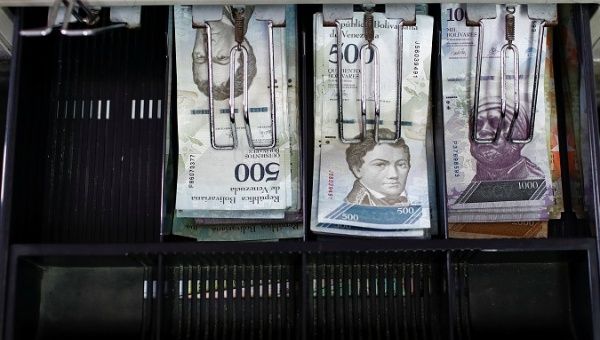 Venezuelan bolivar notes are pictured in an open cash register at a parking lot in Caracas, Venezuela in May 2018. | Photo: Reuters

Officials said the new bolivar notes would coexist with old notes during the financial overhaul.

June 2 (teleSUR) Venezuela has postponed the introduction of the new Sovereign Bolivar bank notes until August 4 after a recommendation from the national banking association as part of the country’s national dialogue process.

“We encourage all financial institutions, public and private, to continue pushing forward every convenient and necessary action aiming to adapt their platforms and technological equipment to begin the new monetary scheme in optimal conditions, and facilitating the financial transactions of the population and protecting our currency,” Wilmar Castro Soteldo, Venezuela’s vice-president for the economy, said in a release while confirming the new date for the switch.

“The Bolivarian government, together with the people, will continue working for the productive development of Venezuela, hand in hand every sector that wishes to work for the country’s well being,” the statement from Castro Soteldo said. “Only together and under the supreme objective of protecting our people we will take Venezuela towards a future horizon of economic prosperity for the consolidation of a strong Venezuela.”

The move comes after President Nicolas Maduro held meetings with executives and representatives from Venezuelan banks about the country’s economic development at the government’s house in Caracas. The currency was initially set to be introduced on June 4.

Aristides Maza, head of the Venezuelan banking association, said while the currency change was a step forward for Venezuela delaying the initial launch was allow for a more seamless transition. He said postponing the measure for about 90 days would allow the two currencies would coexist during a transition period.

Officials have decided, however, on a 60-day delay, due to the lack of availability of printed currency in some areas.

“I agree with a period of 60 days,” Maduro said in a televised meeting with banking industry leaders in the presidential palace, adding that the period could be extended to 90 days. “This monetary ‘reconversion’ is very much needed by Venezuela.”

He also said new bolivar notes would coexist with old notes during the financial overhaul.