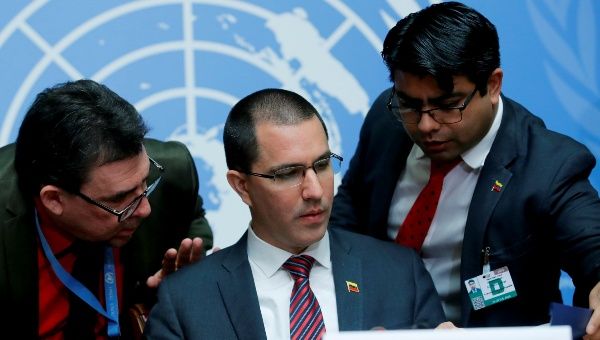 “The renegotiation of our external debt is underway, but it has been made more difficult by U.S. sanctions,” Arreaza told reporters in Geneva.

Feb 27 (teleSUR) Venezuela’s Foreign Minister Jorge Arreaza said U.S. imposed sanctions are making foreign debt renegotiation more difficult and that they would look to work with other countries to alleviate their needs.

“The renegotiation of external debt is underway, but it has been made more difficult by U.S. sanctions,” Arreaza told reporters in Geneva.

The U.S. government imposed financial sanctions on Venezuela in August, prohibiting dealing in new debt for Venezuela or its state oil company PDVSA.

This has made financial transactions between Venezuela and the rest of the world more difficult, aggravating the country’s economic crisis.

“It’s incredible how global banks have reacted with panic. If a bank somewhere in the world works with Venezuela, they feel they are going to be sanctioned,” said Arreaza.

The sanctions not only have affected Venezuela’s high profile politicians but common people, business persons and U.S. companies working with Venezuela. The country is now suffering a food and medicine’s shortage worsened by the sanctions. “Yes, it was bad, but the sanctions have made it worse,” declared Arreaza.

But Arreaza shows himself confident Venezuela will overcome these problems and trusts Maduro to “stabilize and diversify the economy in Venezuela” to “achieve alternative routes.”

“If the international financial system blocks Venezuela, we are working with Russia, China and Turkey to find new mechanisms,” said the foreign minister.

During his tour around Latin America in search of allies, U.S. Secretary of State Rex Tillerson suggested his government is considering a new wave of sanctions on Venezuela’s oil.

Now, several U.S. agencies are reviewing the possibility of implementing these sanctions to remove Maduro from office. Sanctions could include completely prohibiting any Venezuelan oil to be sold in the U.S. and blocking any oil related product going into Venezuela.

“The message is we will continue to ratchet up the pressure until the Maduro regime is removed and Democracy is returned to Venezuela,” a senior administration official told McClatchy.

Arreaza also pointed out that the U.S. fears any agreement between the Venezuelan government and the opposition because then they would “go together to Washington to demand President Donald Trump suspend, stop, lift the sanctions and cease hostilities against Venezuela.”